Juliet Ibrahim, Ghanaian actress, has poked the bear on social media platforms over comments she made during an Instagram live session by Tori Lanez, Canadian rapper.

Tori held a quarantine live radio session on Thursday night in which the talented actress posted a few comments.

Ibrahim however attracted negative attention when she spoke about the giveaway culture and “hunger” in Africa.

“If this was an African artist live, I’ll be seeing account numbers all over the place,” she said.

“Chai! Milk that some people need to feed in Africa.” 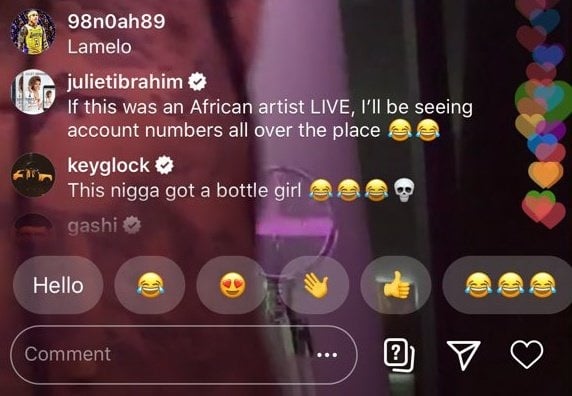 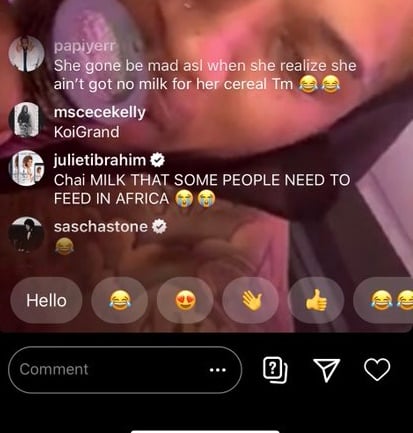 Her comments have not gone down well with quite a number of users who have taken to social media platforms especially Twitter to vent their annoyance.

“After Naira Marley did his own, Juliet Ibrahim went ahead to broke-shame Africans on Tory Lanez live video really dumb and disrespectful,” a Twitter user said.

“Everyone wishes to be “a giver” but life is not a straight line. I’m not saying Juliet Ibrahim is wrong but The fact that you’re on the brighter side of life doesn’t mean you should spit on people struggling to make end meets,” another user said.

After Naira Marley did his own, Juliet Ibrahim went ahead to broke-shame Africans on Tory Lanez live video

I told you all that the reason these celebrities thrive in Instagram is because they don't have an iota of sense, no vibes, just good pictures.

When they've a single chance to type sth you see their empty brain. Look at how Juliet Ibrahim went & disgraced her entire family. Smh.

Juliet Ibrahim said what she said, cos the ONLY thing differentiating some of you from the Beggars on the street is the Internet you have.

You went and sneak in your IG business page on same IG live like we won't notice.
Kim Kardashian won't do that.

Begging is begging don't sugar coat it.
Juliet Ibrahim is a 🤡🤡 abeg

I just saw a post where someone compared Juliet Ibrahim to an Apple. I’m so disappointed because no matter what happens we shouldn’t be doing that, it’s embarrassing. How can you degrade an Apple that made Adam and Eve wise down to the level of comparing it with Juliet.

“Milk that people need to feed in Africa”

Was it Toke that was holding Juliet Ibrahim’s phone? This is beyond Broke-shaming, it’s racist!

Once these Celebrities type, their stupidity in all its glorious Splendour must jump out!

Juliet Ibrahim has joined the longlist of celebrities poverty shaming people.
Truth is that, if not for God, a lot of these celebrities will be dropping account numbers for giveaways. They forgot that anyone’s story can change just within 2 seconds.

There are poor people in every continent in this earth.Even in the U.S,there are people who can't afford milk but Juliet Ibrahim thought it wise to insult the whole African continent on Instagram live, called them beggars but went ahead to drop her business page on the same video pic.twitter.com/rDxrcTzrpR

Someone said Juliet Ibrahim's brain is in her ass. No wonder the nigga kept pressing it..ei😂 😂😂 pic.twitter.com/00crk2jBJZ

Juliet Ibrahim disrespected Africans on Tory Lanez IG live by saying we all beg online, same her still managed to sneak her business handle on the same live show supposedly begging for patronage, is this not hypocrisy of the highest heavens?

For those saying Juliet Ibrahim was right, how many account details did u see on fatherDMW & evss or Kiddominant or pheelz & mastercraft Live?
She wrongfully condemned us all on a live video watched by over 300k people across the world and you still stupidly agree she was right.

Even if Juliet Ibrahim has nothing serious to comment on Tory's IG Live… why not just join "Ik Ogbonna" and be dropping Random country’s flag than going out there insulting not just Ghana but the whole Africans, She forgot No current condition is permanent. 🤦🏻‍♂️

Tariq: Uncle k did you hear abt the fucked up comment Juliet Ibrahim dropped on Tory lanez IG live, I think she's too intelligent for that, her account must have been hacked.
Kanan: Whateva they said that b*tch did? She did it! Her brain is in her ass, she's always sitting on it. pic.twitter.com/fETZYYZKRv

Juliet Ibrahim out here draggin a whole continent uno, was the comment in the second frame even necessary !! makin it look like Africa is a refugee camp

This is not appropriate on many levels, what kind of comparison is this? how will you compare Juliet Ibrahim to coconut??

That's not fair, coconut has something in it but Juliet has nothing in her head, don't disrespect coconut like this https://t.co/uDkGCRRzCV

“Don’t follow celebrities, what is famous is rarely wise”

Some of them don’t have sense one bit kai

Someone said, If Kim Kardashian is 1080p.