Divine Ikubor, a Mavin Records-signed singer better known as Rema, has embarked on a Twitter spree, claiming that he is not of this world.

The rants began after the 20-year-old Afrobeats star announced that he had hit 100 million streams on Audiomack.

100 MILLION PLAYS! My Ravers did that! Our plaque on the way 🦇💽 pic.twitter.com/2kDtlImB1W

In a flurry of highly controversial tweets, the singer, who came to the limelight after his record deal in 2018, poured out his annoyance on critics — especially those he said called his music “rubbish” because “I infuse my Edo language.”

“Niggas don’t wanna see a kid win, they feel I got it too easy. I shower with my sweat, we go off on this side like the days in BENIN it got nun to do with my deal, come and sign these papers without a hustler spirit, you gone lose! Management gone change my password now lol,” he wrote in what seemed to be a Kanye West kind of rampage.

“Niggas label my music rubbish because I infuse my Edo language. Because I didn’t follow the usual guidelines to music, because I hacked Afrobeats with God-given melodies, they called it ‘Indian’ because they DO NOT UNDERSTAND ME. I’m not of this world, know this now!

“I climbed this cliff with bunch of rejected beats. Some niggas hate me because of that. When we in the same room together, don’t label me proud or rude because I don’t smile, talk or laugh to your jokes.

“Thank you OBAMA for seeing what I saw in Ironman, lot of niggas couldn’t. I was 18 when I made that song, the beat got 6 sounds. I’ll give that simple beat to half the game and I won’t get a record as strong as IRONMAN.”

Rema also claimed that stakeholders in the music industry often dismiss him as disrespectful because he doesn’t alert them before putting out his projects.

He touched on how an acquaintance of his — identified as Ozedikus — sneaked beats that became hits for him.

“I protect my spirit and my flesh, whatever scar I die with my reborn shall possess. Niggas feel I’m disrespectful, they want me to alert them before I drop. I done made millions before this fame, let no man feel this money changing me,” he continued.

“I told D’prince sir I’m making money where I’m at I think I’m good. D’prince said to me stop what you’re doing and come to me boy “you’re the chosen one”, this music shit is gonna pay if you trust me! To the girl who rejected me before fame, I’m eating the royalties off this pain. (WHY)

“Ozedikus took risks for me, he was under management with guidelines. He sneaked beats to me so I could record when my first engineer left me because we couldn’t pay him at the time. All the beats Ozedikus sneaked are now HITS.

“Eric, Sorry I stole your Laptop in 2017, I know you were trying to help me. My Mom had a child on the way, I was the only man in my family. They made fun of her because she got pregnant, I wanted to prove them wrong, bro. I had to do it.

“When my late brother did house parties y’all came when he died only 2 friends stood beside his death bed. That’s why I’m not comfortable around people, they love me because I have something to offer, You know yourselves don’t let me catch you!!!

“Dear new generation artists, let’s be friends genuinely, don’t let these people forcefully make us friends just to prove healthy competition and make us enemies for their own entertainment. I swear I love y’all.

“My first show was 6 zeros, the second month of my arrival into the game, ask the INDUSTRY. I performed with a mask on, because I came into the game with an unannounced EP like the thief in the NIGHT. Bet some of y’all niggas thought it was for fashion. Pathetic.”

He also had something to say to Godwin Obaseki, who was recently reelected as governor of Edo state. 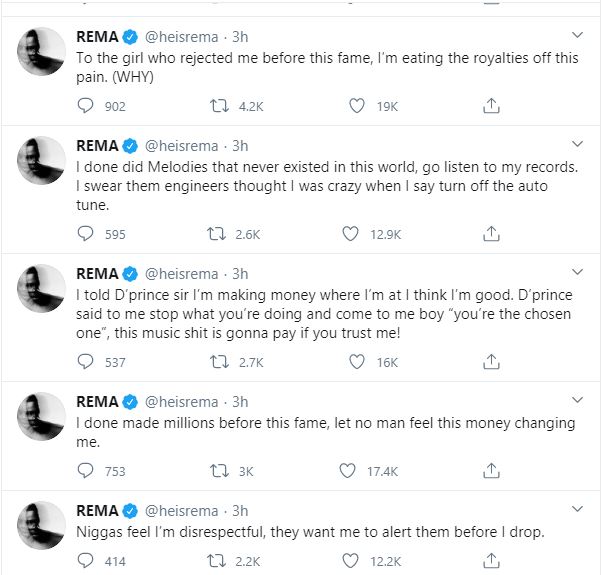 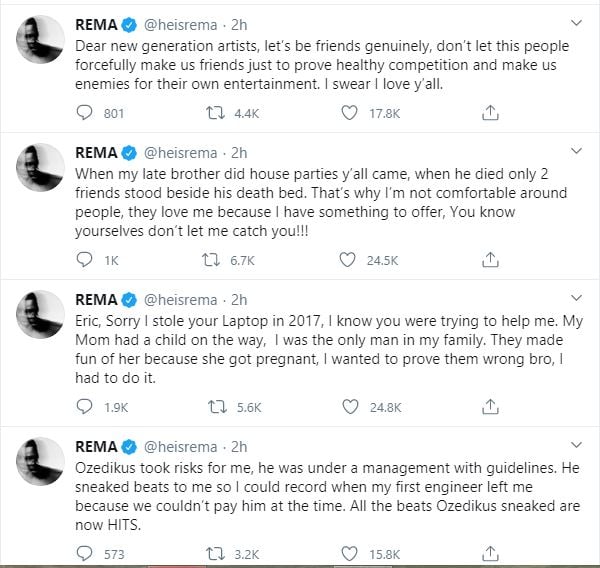 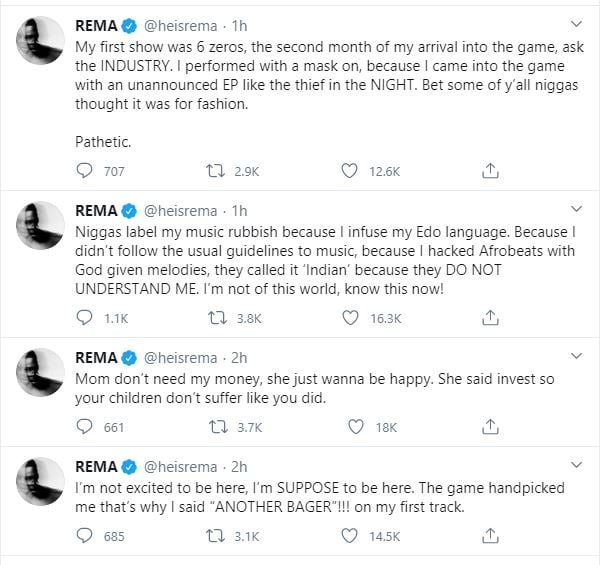 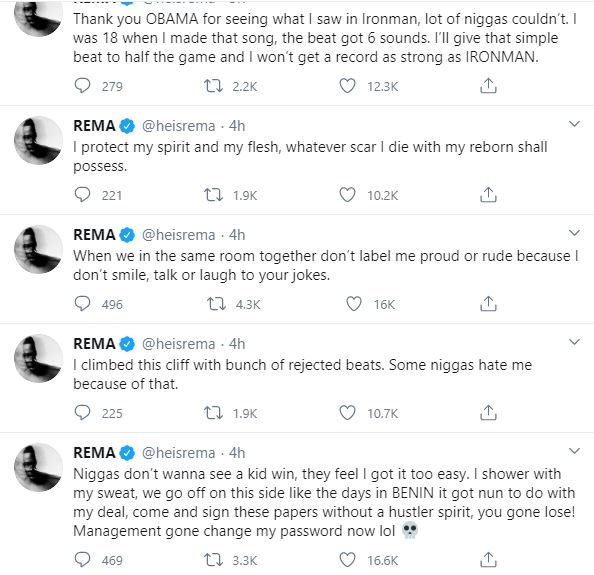 Rema had some months ago left tongues wagging after he took one of his female fans on a date. The lady would later dismiss rumours they were in a relationship.

Ruth Kadiri: Until corrupt politicians get death sentence, voting should be abolished in Nigeria