Marcus Rashford, Manchester United and England forward, and Drake, Canadian rapper and singer, have lent their voices to the ongoing #EndSARS protest.

In the past few days, thousands of Nigerians have taken to the streets of major cities in Lagos, Abuja and Ibadan to protest against extortion and brutality by operatives of the Special Anti-Robbery Squad (SARS) in a campaign that has continued to gain global attention.

The renewed protests against SARS started on October 3 after a video showing a man allegedly gunned down in Delta by its officials went viral.

While international celebrities such as Big Sean, Trey Songz and John Boyega raised awareness about the ongoing #EndSARS protest, some Nigerian and foreign footballers also showed their concern.

Joining the fray, Rashford took to his Twitter page on Sunday to show his support for those affected by the brutality of the police unit.

“My thoughts and prayers with all those affected,” he wrote alongside the Nigerian flag and “End SARS” hashtag.

My thoughts and prayers with all of those affected 🇳🇬 #EndSARS https://t.co/BnFJWjITkG

Rashford was recently honoured by Queen Elizabeth II with an MBE for his works in helping children receive school meals during the coronavirus pandemic.

On his part, Drake took to his Instagram story to re-share a post from Grace Ladoja, a Nigerian-British talent manager, wherein she called for Nigerians in the United Kingdom to join an #EndSARS protest at Nigeria’s high commission in London. 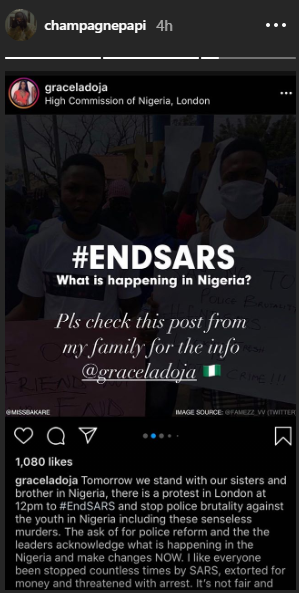 Since Friday, the #EndSARS hashtag has been the most talked about topic not only in Nigeria but in the UK and US and across the world.

Zlatan Ibile: I worked as bricklayer before fame

Omawumi recounts how she was body-shamed as a child