Tiwa Savage has responded to critics of her vixen role in the video for ‘Fever’, Wizkid’s latest single.

The singer has come under criticism for playing the love interest of her colleague in the video.

Wizkid and Savage shared steamy moments in the racy music video which has been trending since its release on Wednesday.

Reacting to the fans who have knocked for her role, the singer took to Instagram to say “I ain’t stopping any time soon”.

She wrote on her Instagram Stories: “She no get shame. Broken marriage. Single mother. Old woman.

“If any of the above is a crime then take me to court.

“If not, then eat this pepper stew I’m serving and drink plenty water cause by His grace and His grace alone, I ain’t stopping any time spoon.” 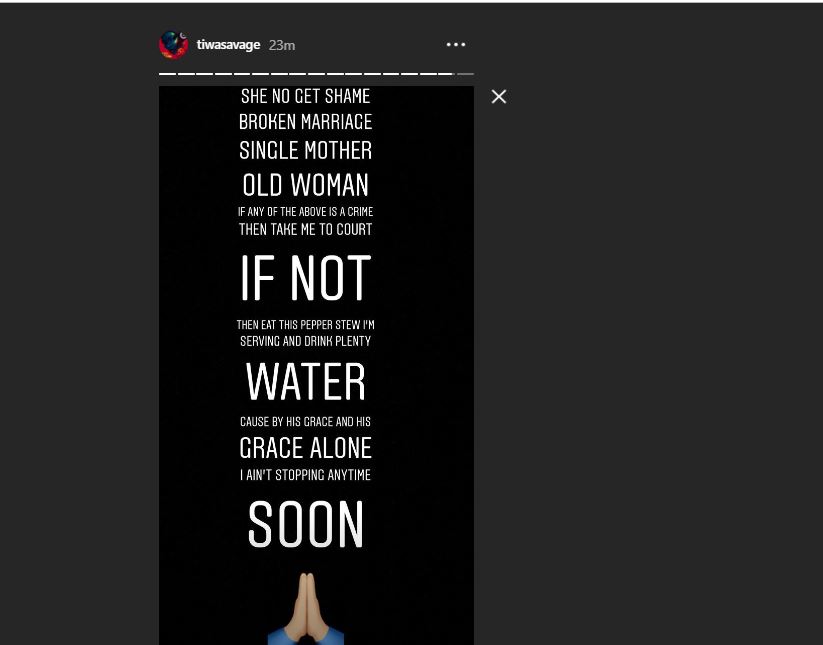 Since the release of the video, Savage and Wizkid have been posting behind the scenes pictures of the video, describing themselves as “President and the First Lady of the Pepper Stew Association”.

Meanwhile, the video crossed the two million views mark as on Friday morning, two days after it was uploaded on YouTube.

Before the end of its first day on the platform, it hit one million views in record time, faster than Wizkid’s ‘Come Closer’ video.