Zahra and Kiki, daughters of President Muhammadu Buhari and Vice-President Yemi Osinbajo, have lent their voices to the ongoing #EndSARS campaign.

In the heat of the protests, Zahra Buhari-Indimi took to her Instagram story to share one of the viral images, which shows three fists with the hashtag #EndPoliceBrutality.

In the same vein, Kiki shared the same photo on her Instagram page with the caption: “Police Brutality Must End Now… #EndPoliceBrutality #EndSARS.”

Some of their followers, however, urged them to relay the messages to their fathers directly as it would yield better results, instead of posting on the social media platform.

In the past few days, thousands of Nigerians have taken to the streets of major cities like Lagos, Abuja and Ibadan to protest against extortion and brutality by operatives of the Special Anti-Robbery Squad (SARS) in a campaign that has continued to gain global attention. 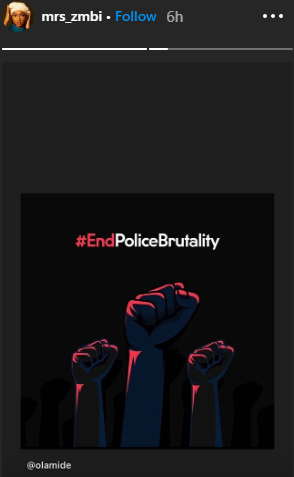 On Friday, the #EndSARS hashtag was the most talked about topic not only in Nigeria but in the UK and US and across the world.

The renewed protests against SARS started last Saturday after a video showing a man allegedly gunned down in Delta by operatives of the police unit went viral.

Buhari had recently directed Mohammed Adamu, inspector-general of police, to address the concerns of Nigerians about police brutality.