Kizz Daniel, Nigerian Afropop singer, has threatened lawsuit over claims that he made supportive comments on the rape scandal against Biodun Fatoyinbo, senior pastor of Commonwealth of Zion Assembly (COZA).

This comes after a news outlet had claimed that he criticized Nigerian celebrities who “followed the trend”, saying that they had no “right to judge the COZA pastor.”

In his reaction to the report, the talented singer took to his Instagram page to pen a swear-laden press statement; threatening to take legal action against the brains behind the publication.

“God will punish you both now and in eternity @iamkyno — you and all the people behind you. I’m coming for you with all i’ve got Oga and I swear, you go feel am,” he wrote in the now deleted post.

“My attention has been drawn to a publication by the Vanguard newspaper stating that I took sides with the embattled Pastor of COZA, Abidoudn Fatoyinbo. I will like to categorically state that I never granted an interview with Vanguard or any newspaper.”

“I am currently busy on tour in the US and haven’t had the time to discuss the issue in my closet let alone call industry mates names. Please disregard this news article making rounds. It is false and fabricated.

“I have not spoken to any journalist regarding the said matter or any other matter including music in recent times. Any platform(s) that publishes this news or any unverified news about Kizz Daniel and FlyBoy INC. will face legal action.” 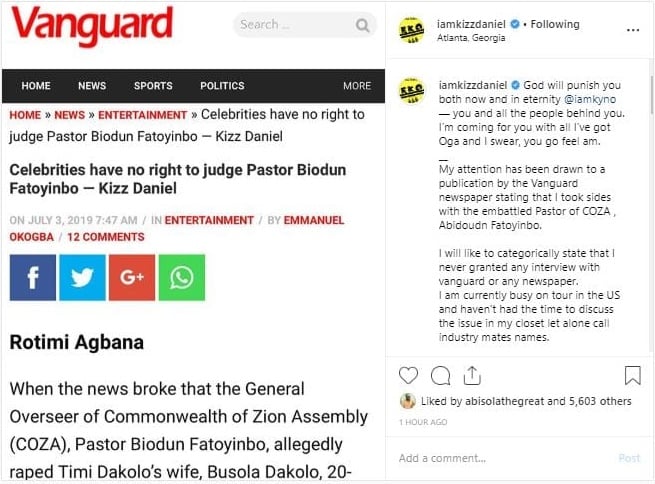 In the wake of the rape allegations made by Busola Dakolo against the COZA pastor, some celebrities including Timi Dakolo, her husband; Banky W; Adekunle Gold; Kemi Adetiba; Omoni Oboli and Stella Damasus have called for investigations and justice to take its course.

After a series of protests and subsequent accounts and allegations that followed, Fatoyinbo announced his decision to step down from the church’s pulpit.

The Remedies, pioneers of Nigerian hip-hop, reunite on Headies stage