Vee, ex-housemate of the Big Brother Nigeria (BBNaija), and Zeena & Zara Limited, a clothing brand, have engaged in a heated war of words on Instagram over a contract fallout.

The drama started on Tuesday after the reality TV star took to her Instastories to dissociate herself from the brand.

“I am no longer associated with Zeena and Zara brand, regard every image by me shared by them as false advertising and only do business with them at your prerogative,” she wrote. 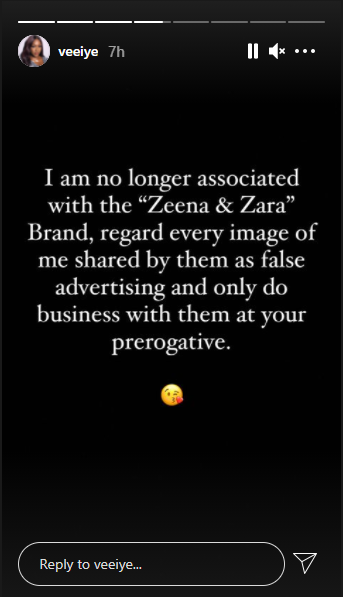 In a follow-up post, Vee said Happiness Adebayo, the company’s chief executive officer (CEO), had earlier reached out to her about the deal — expected to last for six months.

She alleged that a few days after the contract commenced, the company’s CEO, however, described her as “someone difficult to work with,” and thereafter demanded a refund.

The reality star said that her team had originally paid back two out of the initial 2.5 million naira — part payment made by the company — but an extra N500,000 was deducted by her management.

Vee also explained that both parties were still in the contract termination process when the company started sending out the information to media outlets for publication.

The reality TV star threatened legal action against the company, noting that her lawyer has already sent an email to them.

But reacting in a series of posts, the company blasted the reality TV star while accusing her of not keeping to her end of the deal.

The company asked the fast-rising singer to pay the balance of N1.9 million debt she is allegedly owing before considering termination of the contract.

“Apparently Vee paid 2million out of the 2.5m she was given for the deal she refused to honor. However, the shoot including the items she took cost about 1.4million which she insisted on not paying back,” it wrote in one of the posts.

“I mean, how can you sign a contract then refused to comply by posting the shoot done after which you decided to delete the picture of the contract signing. I believe we all understand what that means so since you couldn’t fulfill your end of the bargain, we decided to send her manager a mail to terminate the contract after 48 hours without response.

“Now she refused to pay for the loss incurred for the shoot, not forgetting that she made away with items worth 400k including the 500k balance from the ambassadorial deal payment, all tuning to about a total of 1.9million.

“Veeiye, please note that since you have refused to complete the outstanding, the Zeena & Zara brand will use all the content done on the shoot. This was discussed but you insisted on not paying, in case you change your mind, kindly pay up then the content will be taken down from our page. Thank you.”