Nina Chinonso Onyenobi, a former housemate of the Big Brother Naija (BBNaija) reality TV show, and Tony, her husband, have welcomed their first child together.

The reality TV star’s husband took to his social media page on Monday to break the good news.

“Sometimes the smallest things take up the whole room in our heart. Look who dropped in, our bundle of joy has arrived….Denzel Kelechukwu A. I love you, son,” he wrote in a post on Instagram. 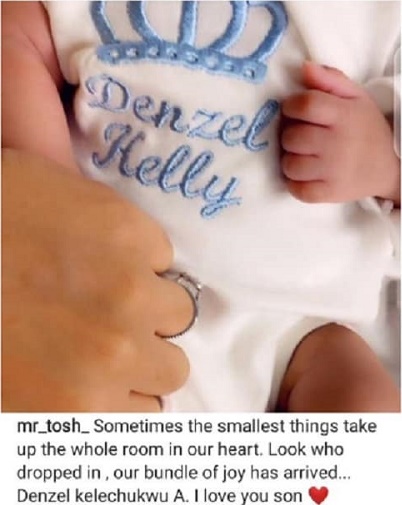 It is believed that the 2018 BBNaija housemate delivered the baby in the United States.

The reality star had earlier left tongues wagging after she refused to reveal details of her husband following their wedding.

She also made the headlines over her seeming criticism of former housemates of the reality TV show who she said were marrying themselves.

“I don’t get why my name is being mentioned in this whole BBN marriage thing. Must I marry a big brother housemate? I bet you all ain’t ready for me,” she had said in reaction to the relationship between Khafi Kareem and Gedoni Ekpata, two ex housemates of the show.

Nina and Miracle Igbokwe, the eventual winner of the 2018 edition of the show, were earlier speculated to be in a relationship while the show lasted but the latter dismissed the claims.

Marrying you 14 years ago one of my best decisions, Obi Cubana tells wife

OBITUARY: Chris Jeyibo, a believer in Nigerian entertainers, who gave and kept giving