Ned Nwoko, the husband of Regina Daniels, the Nollywood actress, has dismissed rumours that he wants to marry Emmanuella, the teenage comedian.

There have been unverified reports that the businessman and politician visited the online comedian’s parents with the intention to pay her bride price.

“I hear say you won marry Emmanuelle is it true or false?” the user asked in pidgin English. 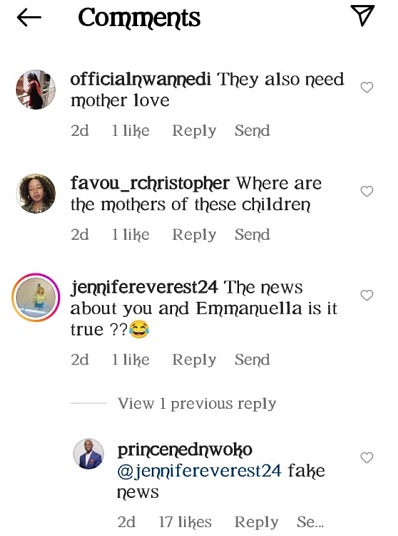 When another user placed a similar question across to the politician, he simply tagged it as “fake news.”

In February, Nwoko threatened to report fake news carriers to the police for appropriate action.

The threat was on the back of a similar rumour that he married a new wife.

Nwoko is known to be a big fan of polygamy.

He got married to Regina in April 2019 and they welcomed their first child together in June 2020.

The pair also announced the arrival of their second child a few weeks ago.

In 2020, the politician opened up about his desire to have more children and his belief in polygamy.

“They came to look around and I liked her and that was it. So whether I marry another wife or not; she knows it can happen. I come from a very polygamous environment. I love children so I want more children. She knows this,” he had said.

“My other wives know it. So we will see what happens. There are women everywhere.”