Akwaeke Emezi, Nigerian-Indian author, has reacted to the essay by Chimamanda Adichie, feminist-novelist.

Emezki — who identifies with the pronouns “they/them” in her resolve to remain gender-fluid — and Chimamanda have been in a protracted feud over the former’s concerns about the latter’s perspective on transgendered women.

On the back of Emezi’s repeated criticism, Chimamanda published a three-part essay on Tuesday wherein she shared her side of the story. She also denied Emezi’s allegations of transphobia against her.

The feud had come after Chimamanda’s 2017 interview in which she addressed whether or not trans women are considered women, and where she also dismissed the need to prioritise terminological inclusion but favoured an experiential view of womanhood.

In her essay, which partly dwelled on her dealings with the author, Chimamanda had accused Emezi of lying “manipulatively” in a manner that exposed her (Chimamanda) to “reputational damage”.

The author, who didn’t mention Emezi’s name, spoke of how the subject had included her (Chimamanda’s) name in the biography of her book despite reacting “viscerally” to being referred to in the news as Chimamanda’s protege.

Chimamanda said she, as a result, sought to remove her name in Emezi’s book bio as she used it without consent. She also claimed that the move got her further attacks where her parents’ death was dubbed a punishment for transphobia.

But in reaction to Chimamanda’s publication, Emezi said she and her cohorts had been on good terms with Chimamanda until they found that the author “denied” their existence as trans women.

“To understand that someone you rooted for so deeply denies your existence, and to deny your existence means they don’t want you to exist, for which you would have to be literally dead,” Emezi partly wrote via her Instastory.

“If you support Adichie, even tangentially, you have picked your side and it is against trans people. If you were in the literary world and silent about this…, then that tells on you to do with all that what you will.”

The non-binary author also tackled Chimamanda for “publishing the emails without consent,” adding that her essay was “designed to incite hordes of transphobic Nigerians to target me.”

Emezi, whose latest novel ‘Dear Senthuran: A Black Spirit Memoir’ was released last week, went ahead to call on stakeholders in the media and bookselling space to wade into the issue.

“And for all you literary folk reading this, all of you in publishing and media and bookselling, ask yourself how comfortable you are in your silence around what Adichie is doing,” she added.

“She sat there and made a decision to deliberately target 2 Black queer disabled trans author during their launch week, ironically of a book in which I speak openly about how book launches often end in suicidality for me.

“She wrote an incendiary post that she knew would send hundreds of transphobic and homophobic people to our social media, flooding our mentions with violent comments what do you think her goal was with that?

“It’s not a coincidence that the writers she’s targeting are queer and trans. Trying to cause all this harm for what? Because she was called out for being transphobic.

“Because her position in the literary world made her feel she could not be critiqued for her violence to trans women, least of all from writers who she considered her juniors because we attended her workshop.”

Emezi, whose parents are Nigerian-Indian, has earned several awards for her 2018 debut novel ‘Freshwater’.

She had also partaken in a Lagos writing workshop by Chimamanda, having described herself as a fan of the novelist. 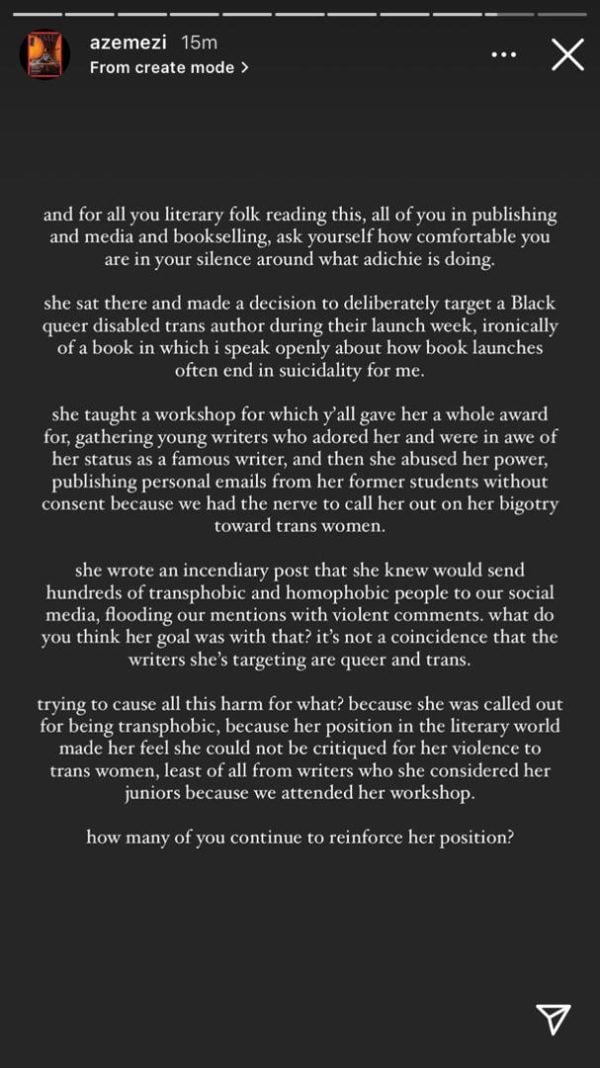 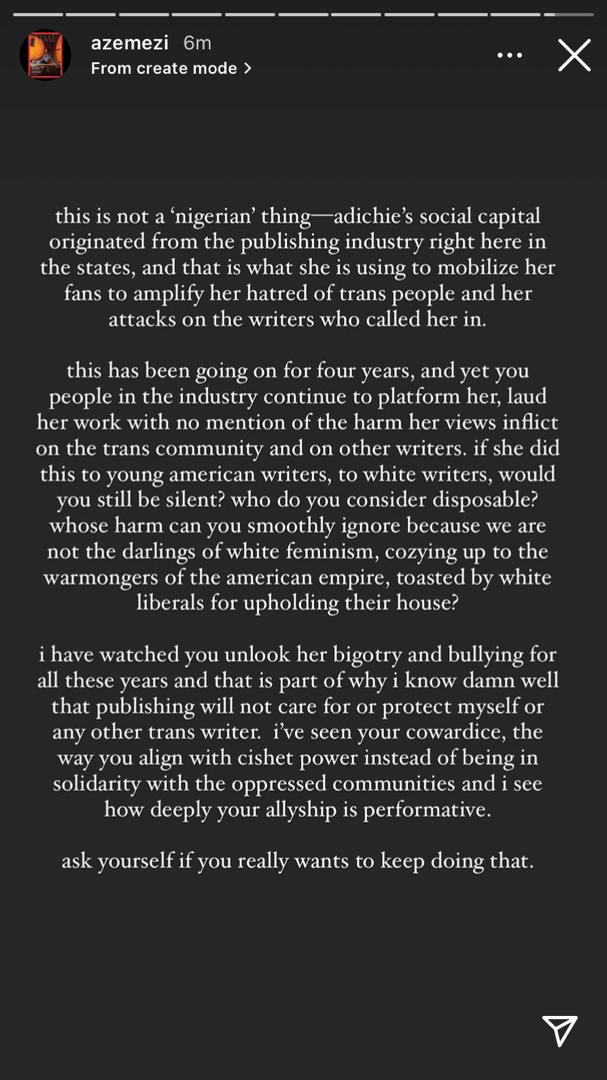 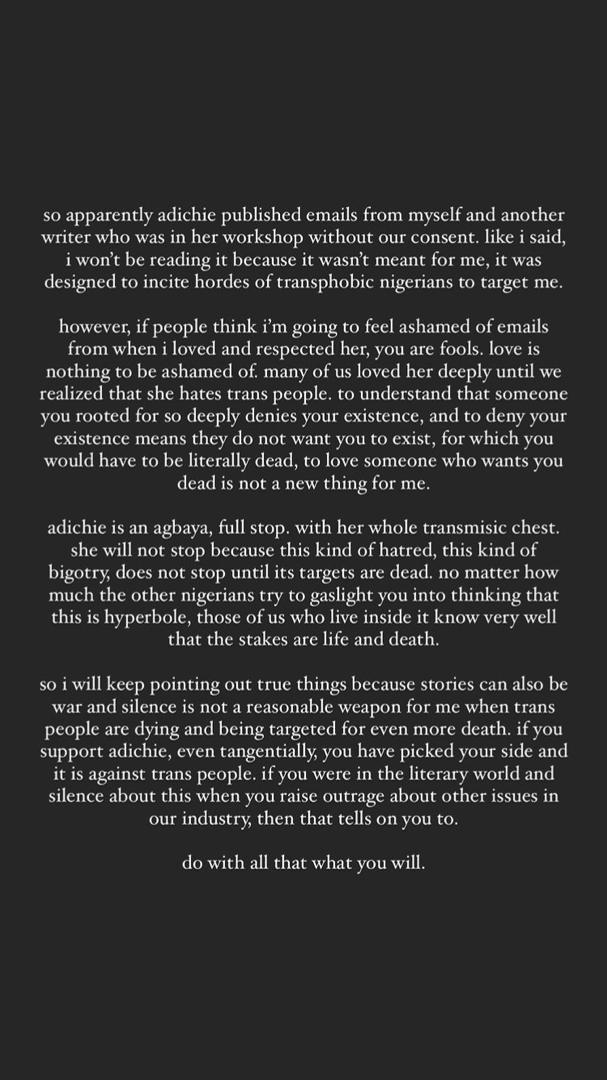 Did You Know? Actor Ken Erics is a musician, has a band and goes for shows