The drama started on Tuesday when Okoye took to his Instagram page to share a short video of men engaging in a dance challenge that involves breaking bottles on their heads.

The singer had in a post accompanying the video teased his fans saying, “who is doing this new dance challenge this Christmas December period? You’re on your own.”

Shortly after the post, Osaze had slammed the music star over the post, accusing him of suggesting such despite “robbing people in broad daylight” with his business.

“What happened to you @Peterpsquare? You are robbing people in broad daylight with that your nonsense business and now you want to take even Christmas from them? You no dey fear God at all?,” the former Nigerian international had replied on his Instagram story. In a separate message to the singer, Osaze had wondered if Peter could ask his kids to engage in such dance challenge.

He had also claimed the singer’s songs inspired him to serve God, asking him not to depart from God.

“Bro, you no go tell your kids to do that. You’re better than that. Many of your songs brought me to God. No depart please. Think am well. Be blessed,” he had added. 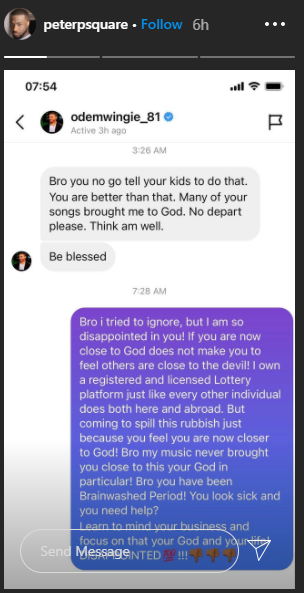 But responding in a flurry of posts on his Instagram story on Wednesday, the former member of Psquare, a now-defunct musical group, said the football star’s comments were indicative that he is “sick and needs help.”

“Bro I tried to ignore but I’m so disappointed in you. If you are now close to God does not make you to feel others are close to the devil. I own a registered and licensed lottery platform just like every other individual does both home and abroad,” he wrote.

“But coming to spill this rubbish just because you feel you are now closer to God! Bro my music never brought you closer to this your God in particular. Bro, you have been brainwashed Period. You look sick and you need help.

“Learn to mind your business and focus on that your God and your life. Disappointed.”

In another post, the singer called on people to pray for Osaze, noting that all is not “well with him.”

“Please pray for my namesake Peter Osaze Odemwingie. All is definitely not well with him,” he added.

He also shared a picture of himself and the footballer with the caption “My prayers on you bro!”

‘Does feminism imply not having sex with men?’ — Grace Ajilore sparks dispute over pregnancy announcement

Lizzy Anjorin: There’s nothing like husband snatcher in Islam

Mr Ibu: I was once prepared to kill myself by jumping into a well