I’ve been trying to divorce Kim, says Kanye West in another Twitter rant

Kanye West, US rapper, says he has been trying to divorce Kim Kardashian, his wife, in another Twitter rant — fuelling speculations the couple could be heading for a split.

The 21-time Grammy winner has been making the news in recent times over his controversial comments on the microblogging platform.

He had in an earlier Twitter rage aimed a dig at his wife for covering Playboy, a X-rated US magazine, in 2007.

But while the dusts generated by the development had yet to die down, West further left tongues wagging with another series of now-deleted rage-laden tweets.

In the latest posts, the ‘Ye’ singer said he has been trying to part ways with the reality TV star since she met Meek Mill, a US rapper, at the Waldorf hotel in 2018 during a prison reform tour.

“I got 200 more to go. This my lady tweet of the night … Kris Jong-Un Lil baby my favorite rapper but won’t do a song wit me”. 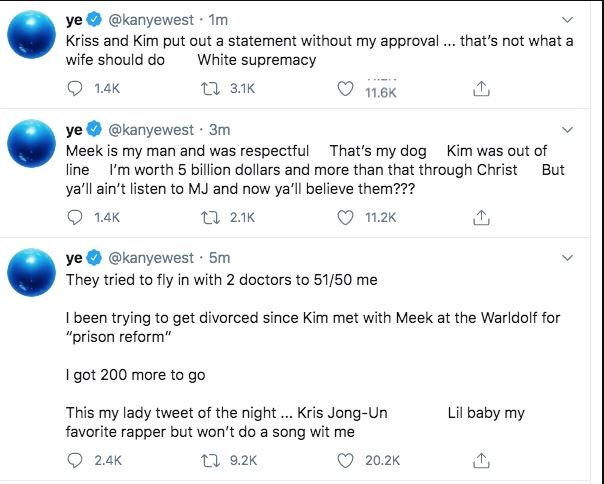 The duo tied the knot in May 2014. The union has been blessed with four children namely: North, Saint, Chicago and Psalm.

The development would further stretch the growing concerns over the 43-year-old rapper’s health — after he is said to be suffering bipolar disorder.

West’s criticisms of Kim started at his first campaign rally where he revealed she tried aborting North.

Nse Ikpe-Etim: Why I don’t flaunt my marriage on social media