Laycon’s story is one that demonstrates that hitting stardom doesn’t always take years. It could be hours, days and in some cases, months. Just two months ago, he was an unknown figure to many Nigerians. But a few hours into the 2020 edition of the Big Brother Nigeria (BBNaija) reality TV show on July 19, his name started to make the headlines after ‘Who Is Laycon?’, his eight-track EP, featuring fast rising and established singers, including Reminisce, surfaced online.

It was the first major revelation about the graduate of philosophy from the University of Lagos (UNILAG) that endeared him to many lovers of the show. As the ‘Who Is Laycon?’ trend continued to garner momentum on social media platforms, many lovers of the show craved more knowledge about him. It was a curiosity piqued by his breathtaking talent, sheer grit and passion for greatness.

It was not surprising, therefore, that about one month into the show, he was among the three most-searched housemates of the ‘Lockdown’ house alongside Erica and Nengi, according to Google Trends.

It didn’t take long before his name became a sensation on the internet and since then, the 26-year-old, born Olamilekan Agbeleshe, has continued to blaze the trail.

From relative obscurity, Laycon could be on the cusp of snagging the N85 million grand prize for this year’s edition of the show.

Ahead of Sunday’s grand finale of the reality TV show, Laycon’s name has continued to dominate heated discussions on social media platforms. First, it was about him becoming the head of house (HoH) in the final week, and then the drama that ensued after he revealed his Sickle Cell (SC) genotype.

Unarguably, the man of the moment at the ongoing reality TV show, Laycon is living his dream, basking in the euphoria of the fame he had always craved. As of the time of filing this report, the gifted singer has raked in over one million followers on Instagram and nearly 290,000 on Twitter.

He has also continued to garner the support of heavyweights in the Nigerian entertainment industry including Ufuoma Stacey McDermott, Teni, Yinka Ayefele, Samklef and Sanyeri.

Laycon’s rise to prominence, of course, is tied to many factors and four of these factors were examined by TheCable Lifestyle.

THE CONFRONTATION WITH ERICA

Sometimes, controversies could be the quickest ticket to fame. His face-off with Ngozi ‘Erica’ Nlewedim, a former housemate, was, no doubt, a conspicuous testimony.

For him, it was only a response to a natural stimulus — a desire to have the woman that makes his heart ticks.

But Erica had rejected his request, explaining that she was never attracted to him. She had ditched him for Kiddwaya instead.

The move, however, backfired, soiling the relationship between the two and culminated into Erica’s eventually disqualification from the show after she received her third and final strike.

If not anything, Laycon appeared to be the biggest beneficiary of the heated exchange between the two. Bear in mind that Erica was also seen as one of the top contenders for the grand prize.

His relative calmness amid the dusts generated by the issue further increased fans’ fondness for him and won him several followers in the process.

Also, by being one of the most-talked about issues in this year’s edition of the show, Laycon’s name has also continued to feature in conversations involving Erica and social media trends, which further contributed to his popularity.

The difference between success and failure, they say, is a great team. Laycon certainly understands this better.

A major factor behind his surge in popularity since making his way into the ‘Lockdown’ house was the effectiveness of his campaign team.

From topping Twitter trends on numerous occasions to creating appealing messages, Laycon’s campaign team inspired a movement christened ‘Icons’ that contributed to his widespread acceptability by the show’s lovers.

Aside his face-off with Erica, Laycon seemed to be in the good books of his fellow housemates and it is definitely a plus for his impressive run in the reality show.

Laycon seemed to me like one who had painstakingly studied the traits and peculiarities of champions from previous winners of the reality show. He showed his fantastic equanimity during the emotional drama with Erica and also approached other disputes with housemates in a pragmatic manner.

This year’s edition of the show witnessed the introduction of new twists by Biggie, the instructive voice behind the show’s screen. At the beginning of the show, Biggie had vested power in housemates to determine their colleagues who get eventually evicted after the week’s voting by fans.

In such arrangement, good relationship with fellow housemates was key to staying at the ‘Lockdown’ house. The eviction of Lucy and Kaisha Umaru owed more to the extent to which a housemate is accepted by other colleagues than voting by fans.

When compared with other top contenders such as Nengi and Dorathy, Laycon seemingly enjoys more goodwill from lovers of the show — judging by the weekly results of voting by fans.

Since the commencement of the reality show, Laycon has been named among housemates nominated for possible eviction on three occasions.

On these occasions, however, he had topped the charts after results of the voting by fans were released.

On August 31, he was put up for possible eviction alongside Vee, Lucy, Laycon, Nengi, Tricky Tee and Kiddwaya. When the results of the week’s voting were released, Laycon had 41.41% votes with Nengi garnering only 12.32 votes.

Similar scenario had played out when he was nominated for eviction alongside Dorathy, Ozo and Tricky Tee. Laycon had garnered 50.11% votes to lead the chart ahead of Dorathy who had 26.68% votes. 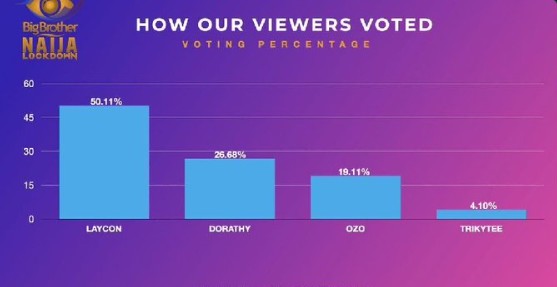 The foregoing showed that Laycon is fans’ favourite.

Unlike other housemates who enjoined immunity from evictions by serving as HoH or deputy HoH, Laycon’s run to the final has been largely based on fans’ votes.

He only became a deputy HoH once when Trickytee emerged the HoH.

Whether Laycon will win this year’s BBNaija or not is a matter of hours from now.

But if winners of reality TV shows such as BBNaija are determined by huge fanbase and massive goodwill from the public, then Laycon is within touching distance of snagging the N85 million grand prize for this year’s edition of the show.

Online giveaway: Is it proof your favourite celebrity is generous?

Lagos lockdown: Positive for our environment?