Jada Pollock, manager and ‘baby mama’ of Ayo Balogun, pop star better known as Wizkid, has denied making the claims of domestic violence against the singer.

In a now-deleted post on her Instagram, the UK-based artiste manager had announced the end of their relationship.

She also accused Wizkid of incessantly beating her — a development which spurred a series of TV and social media discussions/argument on domestic violence.

Pollock has however come out to say that some undisclosed individual had hacked her device and compromised her social handles through which the accusations were made.

“My phone was hacked in the late hours of Monday evening and my Instagram account was compromised,” she wrote.

“I guarantee that the statement written was not by my hand. I can only apologize for any confusion this may have caused. I have now recovered my account.” 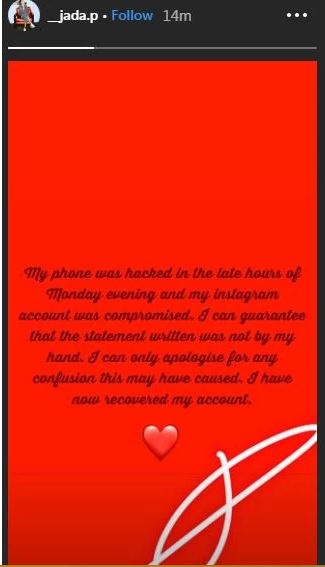 In the accusatory statement earlier attributed to her, Pollock had recounted, with graphic description, how she repeatedly sustained bruises while living in the same house with the singer.

“From today, Ayo and I no longer work together I’ve been in an abusive relationship with him for years, covering up for him time and time again. And I’m tired,” she was quoted to have said.

“Wiz continuously puts hands on me, leaves me with bruises that I cover up from the world, including my friends and family. It often feels like we’re at war in the same house. I have done all I can to keep this together but, from today, I let go.

“You can support someone as much as you can but, at some point, you have value yourself. I can’t raise my son in this kind of environment.”

Report: R. Kelly accused of holding women against their will in abusive sex ‘cult’