Kathryn Fasega, an award-winning filmmaker, is at the helm of a new production titled ‘Two Weeks in Lagos’.

Fasega said the movie is currently being shot in Lagos, describing it as “a love story about a young couple that goes through a lot of challenges”.

She added: “It’s also a love story with a difference because of the characters involved. They are two characters with strong ethics who know exactly what they want.” 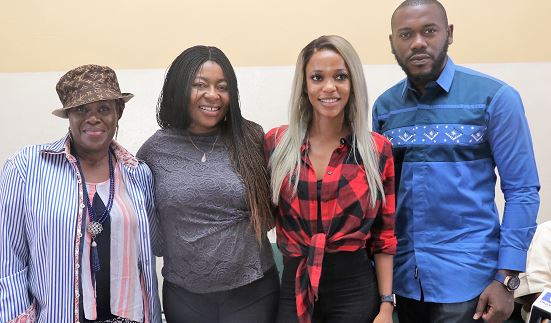 Speaking about the movie, Toyin Abraham said her character is refreshingly calm, as opposed to the boisterous personalities she often depicts.

The actor said: “This is my first time working on a faith-based project/Christian film and it has been a lovely experience.

“The characters have been amazing and it has been fun all the way, the director is very calm and flows with everybody. I love the story, simple and nice and I can’t believe I’m calm in this movie.”

Harping on the simplicity of the movie, Beverly Naya said she fell in love with the script at first sight.

“I love the simplicity of the story and I found that it was really touching,” Naya said.

“I have always been a Christian but lately, I have been working on my spiritual journey and it’s really serious now more than ever.

“When I saw the script, I fell in love with it, I thought I could use my craft to bring people closer to God and this would be a great avenue to do so.”

‘Two Weeks in Lagos’ is produced by Inya Lawal while Ambrose Ovbiebo and Miebaka Ovbiebo serve as the executive producers.

Ken Attoh, director of photography, said the movie took him out of his comfort zone.

He said: “I have had to sit with Kathryn to bring her story to life. The pictures are fantastic, the costumes, the location, everything is vivid. I loved the experience.”

The Women, Mentally…10 movies you should see this weekend