Tonto Dikeh, Nollywood actress, has shared screenshots of an email containing death threats from a self-confessed assassin paid to kill her.

The mother of one took to her Instagram page on Friday to share the lengthy message in which the assassin, who used the name David Hernandez, claimed to have been hired to kill her.

He also requested that she pays a cryptocurrency sum of 0.5 BTC or get eliminated in two days.

“If you value your life, this is not a joke. I received an order to kill you because your activity causes danger to a particular person. I studied you for quite a while and made a decision to give you a chance despite the specifics of my job,” the email read in part.

“I want you to pay the amount of 0.5 BTC. When I receive the funds, I’ll send you the name of the man the order came from as well as all the evidence I have. I would not suggest you call the police or talk to anyone because you have two days… I have my eyes on you.” 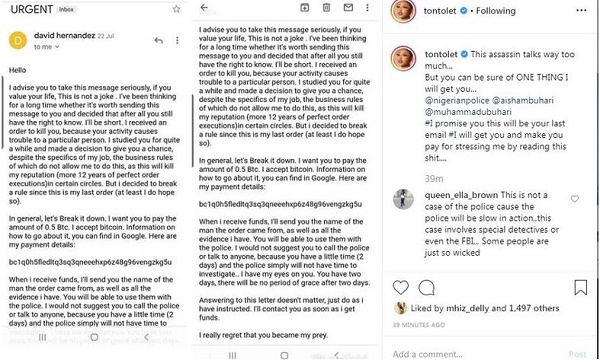 In her reaction, the controversial movie star vowed to bring the perpetrator of the death threats to light.

“This assassin talks way too much but you can be sure of one thing. I will get you. I promise you this will be your last email. I will get you and make you pay for stressing me by reading this shit,” she wrote.

Dikeh has made the headlines on several occasions for her turbulent and controversial relationship with Olakunle Churchill, her ex-husband, whom she had engaged in an open war of words.

She also shared outrageous details of how Churchill was involved in illicit activities which included cultism and internet fraud, adding that he lasts “only 40 seconds in bed“.

Her allegations came after Churchill petitioned Mohammed Adamu, the inspector general of police (IGP), accusing her of illegally selling off his Toyota Prado SUV valued at N22 million after forging ownership of the vehicle to her name.

I would love to make music with Small Doctor, says Johnny Drille