The meteoric rise of Zazoo Zeh

Music fans have witnessed Portable’s spectacular thrust to stardom. It will now be compounded by the release of the official music video of his hit track ‘Zazoo Zeh’ on 26 December.

Portable AKA Dr Zeh, Zazoo Zeh, the newest kid on the block has kept fans constantly entertained with the story of his life, centered around his street song ‘Zazoo Zeh’ now a monster hit that features superstar Olamide and popular dancer Poco Lee. The song is an internet sensation that keeps generating buzz and is constantly trending on social media. There are hundreds of videos out there of young Nigerians showing off hair raising dance moves to the track, weeks before its own video release. As expected, ‘Zazoo Zeh’ music video is filled with breathtaking dance moves. The country is a land of talented dancers.

‘Zazoo Zeh’ is an alliteration that has found its way into the everyday lingo of many Nigerians – young and old. The athletic, heavily tattooed blond-haired artist seemed prepared for his glorious welcome. He is fully decked in heavy gold chains and rings for the ‘bling bling’ effects, with his pants sagging almost to his knees. 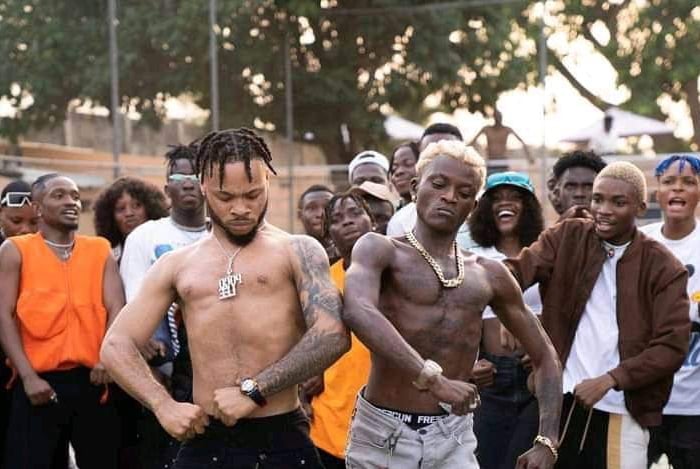 What makes Portable, real name Habeeb Okikiola tick is his absolute appeal to the streets, he fits into the wonderful story of grass to grace that humanity gravitates to quite often. He beats obscurity to hit fame literally overnight, now hanging with the big boys and girls – a sweet Nigerian story.

The childlike timbre to Portable’s voice sets him apart and establishes his signature even before liftoff. His captivating slangs are rapidly delivered mostly in the Yoruba language with a sliver of fuji music sounds mixed with the traditional ewi flow and a banging repetitive baseline. Portable is an amazing dancer, with leg work that keeps viewers’ mouths agape, he is a delight to watch. He calls himself ‘were olorin’ (insane singer), the almighty son of Shaku-Shaku (the dance move that has evolved into the numerous legwork that Nigerians are known for today).

Portable has been featured in almost all the major concerts of this festive season in Lagos and Ibadan. He brought the rush into the shows of Tiwa Savage, Wizkid, Davido, Zlatan Ibile and many others where he totally set the stage ablaze with his pant dropping moves and that sends the audience into a frenzy. Portable is in such high demand, he saw his followership on Instagram swell from about 20,000 to over 500,000 and counting in just a few days. In a recent social media post, he announced he will be hitting the United Kingdom soon as music fans there are dying to see him live.

Another outstanding aspect of the ‘Zazoo Zeh’ story is the chronicle of this artist’s rise via the internet, music fans wake up to updates of his steady progress as well as outbursts and dramas. “Are you mad or something?” he asked in his viral call out of Poco Lee, his protégé whom he said wanted to rip him off. The matter was later settled, all on social media to the delight of his swelling fans.

Some critics have trashed the ‘Zazoo Zeh’ phenomenon as a flash in the pan and also complain of their inability to make any sense of his ecstatic jabbers, while others are fast to judge Portable by his gritty and absolute punk appearance.

It is clear that this artist has made a bold entrance, others can only affiliate and celebrate the once written-off underdog from Sango. He is undoubtedly the new face of Afrobeats and definitely the rave of the moment.

15 things to know about House of Rainbow, ‘first gay church in Nigeria’

INTERVIEW: Growing up in ghetto motivated me to work harder, says Azuh Arinze