Lee Man-hee, the founder of the Shincheonji Church of Jesus in South Korea, has apologised over claims that his members facilitated the spread of coronavirus in the Asian country.

During a news conference in Gapyeong, northeast of Seoul, on Monday, Man-hee went on his knees to apologise for the incidence.

The 88-year-old’s church is believed to have played a significant role in the spread of the virus in the country, prompting government investigation.

It is also believed that members of the congregation had infected themselves with the virus before journeying to other parts of the country.

In his speech, the embattled church leader expressed shock over the development, noting his group tried to prevent spread of the virus.

“We did our best but were not able to stop the spread of the virus,” BBC quoted him as saying. 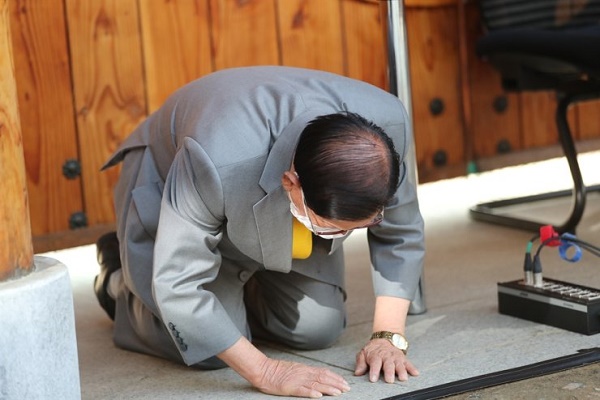 “I’m really grateful, but at the same time, asking forgiveness. I never thought this would happen, even in my dreams,” he told reporters, “before bowing low twice in a traditional sign of humility and regret.”

It was gathered that about 60% of the country’s more than 4,000 confirmed cases are members of Man-hee’s church, with the death toll presently at 28.

Kim Shin-chang, the church’s spokesman, disclosed that a list of the members have already been provided for the government to continue its investigation.

He, however, expressed reservation with the development, noting such could further endanger lives of the church members.

“As you know Shincheonji is labelled as a cult with Korea and also in the Christian community. Because of this label we are often discriminated against, persecuted of even face criticism,” he told the news outlet.

“We have seen hate crimes and violation of human rights just because they are Shincheonji and we have seen human rights violations that led to death. So for the first time we have reveled all of our information.

“We have revealed all of our church locations along with affiliated buildings, along with a list of all our members and also our students, to the officials.

“We were worried about releasing this kind of information because of the safety of our members. But we believe right now, the most important thing to do is to fully cooperate with the government.”

Man-hee is said to have proclaimed himself as the second coming of Jesus Christ who will take 144,000 people to heaven with him.