The Legend Series: I had fake friends when I used to drink and smoke, says Sadiq Daba

Several decades after it held sway on Nigerian television, Sadiq Daba is still well known for his role as ‘Bitrus’ in ‘Cock Crow At Dawn’ — a top drama on NTA in the early 1980s.

Owing to the weight of his performance, ‘Bitrus’ has become unforgettable, permanently crested, etched into the memories of those opportune to be of age to watch the show.

Daba is a powerful actor and passionate broadcaster; he’s the type of orator whose words continuously echo in one’s head long after they have been blurted out.

His methodical approach to theatre and television presenting has made him a favourite of millions of viewers for several years.

On this episode of TheCable Lifestyle’s The Legend Series, Daba talks about the fledgling Nollywood, its shortcomings, his rise over the years, recognition and his battle with leukaemia.

Well, you have just mentioned the word, evolution, that’s what has happened. Thank God for the evolution, people have become more aware. It all started out with drama, with the likes of Hubert Ogundes and co. The Yoruba travelling theatre and some of the pioneers like Kunle Afolayan’s father started all these. I guess that was the beginning of what we call Nollywood today. ‘Living in Bondage’ was the first major film. Here we are today; people making millions and becoming stars.

You relocated from Sierra Leone to Nigeria; did you plan to venture into broadcasting or entertainment?

That never crossed my mind, because then, I just wanted to come back and see where my father came from and that is Nigeria. That is the sole reason why I came back home. Getting into broadcasting in Nigeria was purely perchance, by mistake. That did not bring me here.

How many years have you spent in broadcasting?

Over 35 years, I am retired now. I left NTA after 35 years, thank God I left in flying colours, no wahala, but I am still within the profession, I still practice, I still do documentaries, I still act film.

If I am to rate, I would say 6/10, it could be better, especially the programmes. 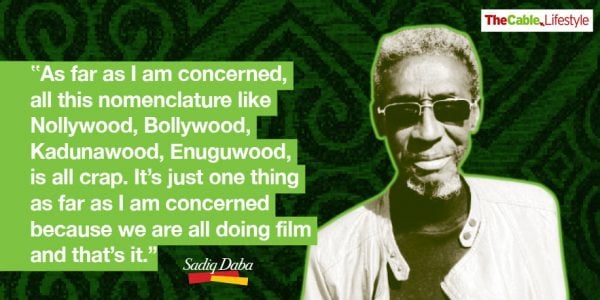 I read that you don’t partake in Kannywood productions that are mediocre, how true is that?

It’s not because it is Kannywood that’s mediocre. It’s all about the production. As far as I am concerned, all this nomenclature like Nollywood, Ghallywood, Bollywood, Kadunawood, and Enuguwood is all crap. It’s just one thing as far as I am concerned because we are all doing film and that’s it. It’s a creative art. So whether you give it babariga or danshiki, its still creative arts, how you go about it is what matters to me. It can come from the west, east, north, south, up, down, nothing bothers me. What I said is the way they go about their productions is what I don’t like. You can’t be more Indian than the Indians themselves. So because of that, I would not do it, but if their story changes and their production attitude changes, of course, why not. That is the way it is. If today, they give me a script that is good and I love it, why won’t I act?

Many people feel the quality Nollywood is still average, by virtue of scripting and acting. How would you rate the industry now compared to the early days?

Things have changed, but the fact of the matter still remains, that if you do not get your acts together, you will not deliver, and commercialisation does not mean that you throw quality for quantity. This is my take and there are very good producers-directors out there, very good stories out there. There are others who say ‘let’s just go to the market and give people what they want’. You cannot see Joke Silva, Tunde Kelani, Kunle Afolayan or Tade Ogidan doing that kind of thing because those are serious-minded directors and producers.

What can we do to even out the industry? It appears many of the actual professionals are pulling out, not involved as much as before because of the reasons you just mentioned.

There are very good young ones out there. Izu Ojukwu is a very talented producer, Lancelot too, I remember when he was with me at NTA, he is focused, he knows what he wants, he knows what he is doing. These are serious-minded young men, and there are serious-minded young ladies who are doing that too. Uche Jombo is there, she is producing now, Ibinabo [Fiberesima] is producing, she is directing. These are people who are doing these things and they come out with fantastic stories. You can’t take it away from them. 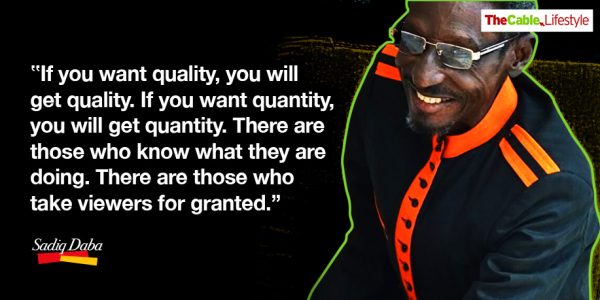 What of the acting?

How did you carve a niche for yourself in the broadcasting industry?

You don’t do what they call follow-follow, you create your own niche. You don’t have to be like the Joneses. I can never be Sunny Irabor. Sunny Irabor can never be me. I can never be Frank Olize, Frank Olize can never be me. So why don’t I look for who I am and assert who I am? That’s what it is. I created a Sadiq Daba image, and that is what I am. First and foremost, you must know why you are there. Why you want to be there. You are not there because there is nothing else to do. People do not know why they are there, it’s because they just entered.  You must have the passion and that passion will bring out something in you.

You said somewhere that you don’t care about recognition from the government. Do you really not care?

If government recognises me, why not?  I deserve it. But if they refuse to, I would not go begging. These are two different things. I wouldn’t go lobbying to be recognised. But if they recognise me so be it, beautiful. I have paid my dues. After all, it’s only good for your nation to recognise you. Who wouldn’t want it? But where I draw the mark is when you start tribalising this thing, start lobbying and people who do not know A from B, you go and give them. It’s annoying, that is annoying. There are people out there who deserve to be recognised and are not.

Which are you more inclined to do? Television series or actual movies?

There is nothing like inclination, they are all one of the same as far as I am concerned. I have done films… plenty. I am sure you might have heard about Soweto, we shot on location in Jos. We had to transport about almost one and a half tonnes of equipment from South Africa. We were at the location for almost 6 months. The only difference is that one is on a smaller scale and one is bigger.

Do you think government funding in the movie industry is enough?

I don’t know if it is enough, the ones that are there, are people utilising it? Are they using it for what it is supposed to be meant for? There are people who go to collect it to buy cars, they don’t use it for its purpose. People abuse the checks and balances. If the checks and balances are not abused, wrong people will not waste the fund. Again it’s a Nigerian thing; the ‘who know who’ syndrome. 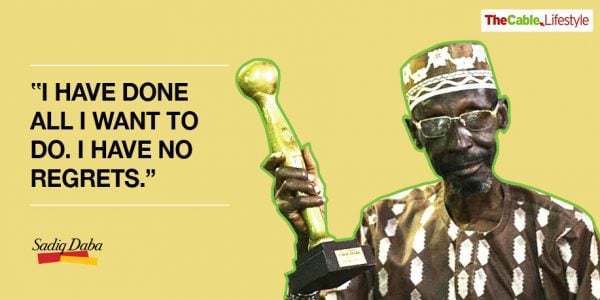 Is there any particular dream you still aspire to actualise?

I have done all I want to do. I have no regrets, I’m very happy. The things I am not happy about is what we talked about concerning the recognition going the wrong ways because of the kind of leadership we have at the helms of affairs in Nigeria who believe in rewarding mediocrities instead of hardworking people and looking around for who and who have contributed what. If you don’t dance to their music, you are as good as useless. I am sure you have never seen me dancing on the platform of any political party. I will never do it. These are the kind of people they like. These are the kind of people they recognise.

How do you unwind

When I used to be a member of your crew, I would go and drink but now I stay in my house and read papers, play crossword or listen to good music, old school. I listen to Harry Belafonte, Elvis Presley, Frank Sinatra, Cliff Richard, Pat Boone. These are my kind of music.

I used to have friends when I used to drink and smoke. Now as far as they are concerned, I’m a useless man. I’m a liability. Maybe it’s even better for me because I am seeing the world in a different light. Now I can tell real friends from fake friends. Most of them come because they know I will buy free drinks and pepper soup. It’s not like they like me. It takes a transition for you to know all these.

Maybe I owe my thanks to God for making me see all these. I was sick, look at my bag of drugs. I had leukaemia and I would have died but for God’s intervention. I get superb treatment from my doctors. I used to enjoy my brandy and my cigarette. That I’m sitting here now is God’s favour.

Do you respond to people’s views on social media?

I don’t respond to insults, it depends on the views. I do not dignify some thoughts. If it is objective and you are coming from my school of thought I would contribute.

Would you call yourself a recluse?

I am not a recluse; I am an Arian who cherishes his privacy. I am very outgoing. I love my outdoor life, I like adventure, I like to read, I like my family life. I don’t run away from people. I have gotten to a certain age where you must draw certain lines. I hardly go for red carpet events because I don’t like the glamour. I like my privacy. Something must connect two of us to talk.

How old are you?

What do you want to be remembered for?

A jolly good fellow, a man who brought a smile on people’s faces, a man who’s always there when people need him. I love my ‘very good’ friends, I love people. If I stay here for one week alone, I feel like I’m in a prison.

Out of all that you have done and achieved, what gives you the most fulfillment?

When I look at myself and I am still alive. Sometimes I look back and I count my friends, my bosom friends, and it dawns on me that they are not alive. So it’s a favour from God. I treasure every second, every minute, every day.

AFRIMA to artistes: You can now submit your songs for consideration