Rita Edochie, Nollywood actress, says those criticising her over the demise of Ada Jesus, a comedienne, “will be the next on the line.”

The spotlight has continued to beam on Edochie since the entertainer, whose real name is Mmesoma Mercy Obi, breathed her last after a protracted battle with kidney disease.

The comedienne thereafter took ill. But amid the drama, the actress had initially cursed Ada Jesus for attempting to smear her reputation.

Edochie, however, later announced that she had forgiven the entertainer.

Following the demise of the comedienne, several Nigerians had tackled the actress over her initial remarks.

But on Monday, the actress shared a video of a young man calling out those blaming her for the way she handled the face-off with Ada Jesus.

In a post accompanying the footage, the actress commended the young man who made the video, while warning people to stop making unsubstantiated claims against her. 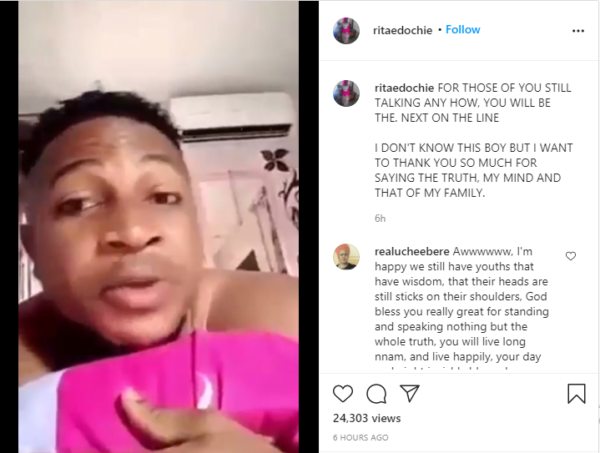 “For those of you still talking anyhow, you will be the next on line. I don’t know this boy but I want to thank you so much for saying the truth, my mind and that of my family,” she wrote on Instagram.

Edochie had earlier slammed those criticising her over Ada Jesus’ death, stating that she remains unperturbed.

“Lord Almighty made me a strong woman and that I will remain. The seed cannot be killed,” she had said.

The development comes at about the same time when Odumeje vowed to deal with persons accusing him of staging fake miracles.

Davido: Wizkid and I are greatest of all time

Kaffy: How I battled depression and won