The alleged killing of Chima Ikwunado, a mechanic in Port Harcourt, Rivers, by some officers of the Nigerian police force in the state, has sparked outrage on social media platforms.

Comrade Phils, an activist, had taken to his Facebook page to disclose that the brother and a client of the deceased narrated to him how men attached to the E Crack, Mile 1 police station, carried out the act.

According to him, the client disclosed that he gave his car to the deceased to fix its air-conditioning system on December 19, 2019.

The next day, he tried reaching Chima, the deceased, via phone but he was unreachable. He then decided to visit the mechanic shop and still couldn’t find Chima and his car. Upon further inquiry from other mechanics at the shop, it was discovered that the deceased was apprehended by the police.

He said the client subsequently visited different police stations till he got to the Mile 1 police station and saw his car parked outside the Eagle Crack division.

The client said upon identifying himself as the car owner, he had a gun pointed at him and was chased out of the station. For fear of being shot at, he left as instructed.

As he went home to restrategise on how to tackle the issue, he said he was visited by Obinna, a brother to the deceased, who explained that Chima and some other colleagues were testing two cars, his and a Toyota Camry, after repairs.

Due to the terrible traffic at the time they decided to drive through a one-way route where they were apprehended by the police.

Obinna said that the policemen asked for bribes but were not satisfied with the amount offered by Chima and his colleagues and immediately accused them of stealing the two cars.

The police allegedly took the cash on them, a total of N150,000, handcuffed them and took them to the police station where they were subjected to “brutal torture”.

One of the arrested suspects, who couldn’t bear the torture anymore, confessed to them breaking into a lady’s home and stealing the cars.

With the knowledge of the reason behind the arrest, Chima’s client proceeds to claim his car. Accompanied by an Airforce commander, he takes copies of the original car documents to the station.

After much back and forth, the car was eventually released to him but Chima and his colleagues remained in the custody of the police.

On January 2, the client disclosed he received a call from a barrister who was defending Chima’s colleagues.

It was during this conversation, it was discovered Chima had died from the torture and his colleagues had been sent to prison with decaying sores from wounds inflicted on them during torture. 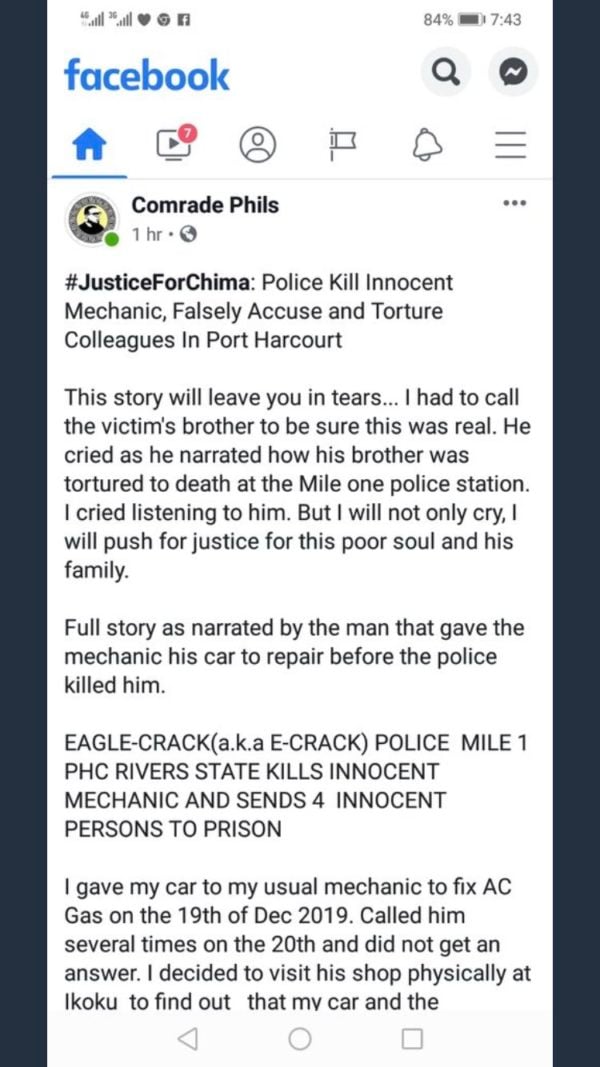 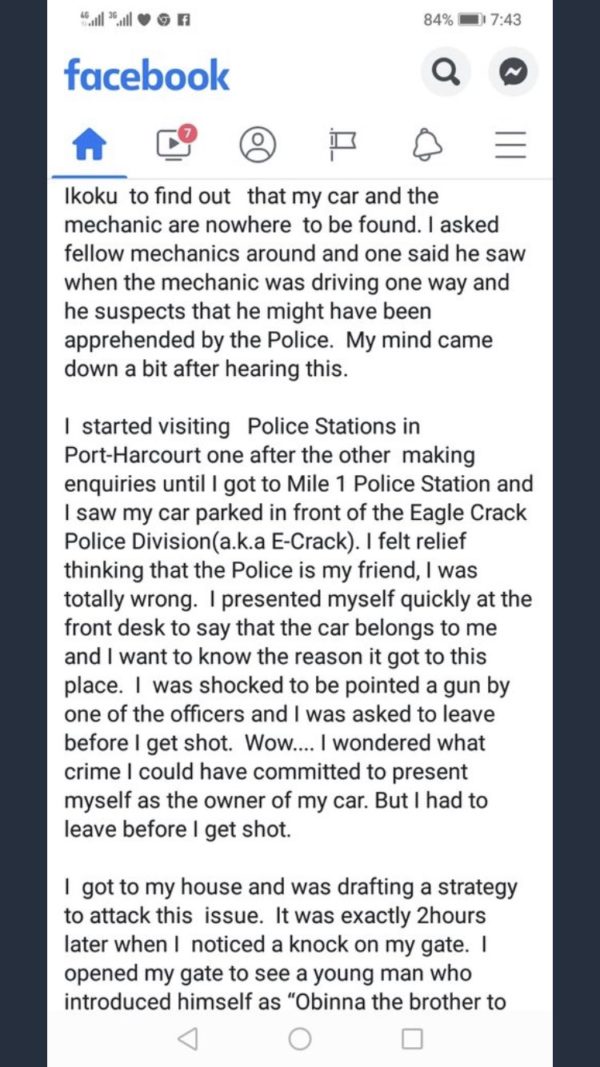 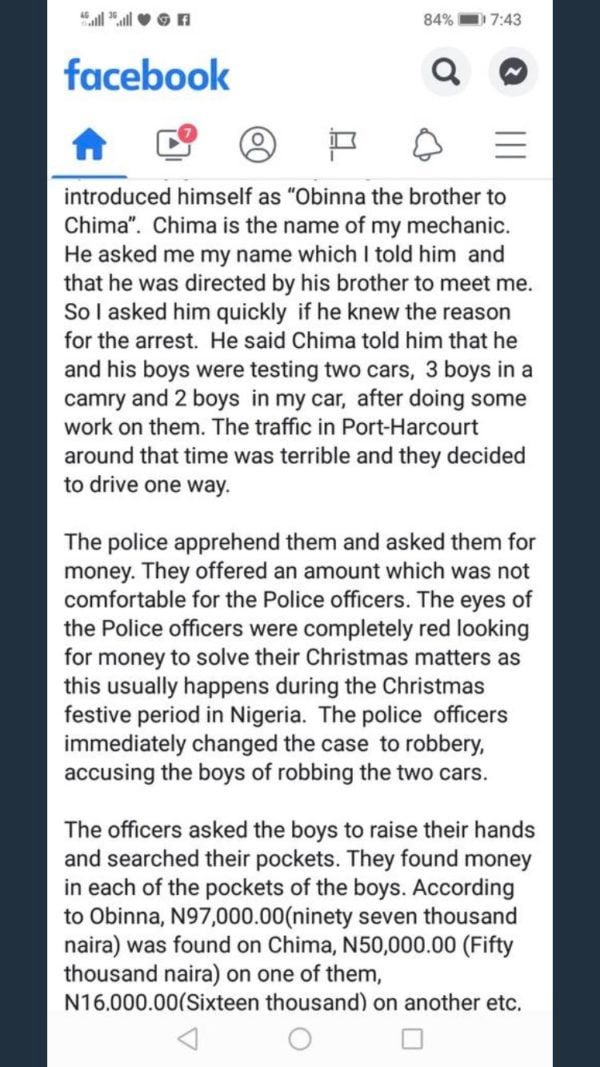 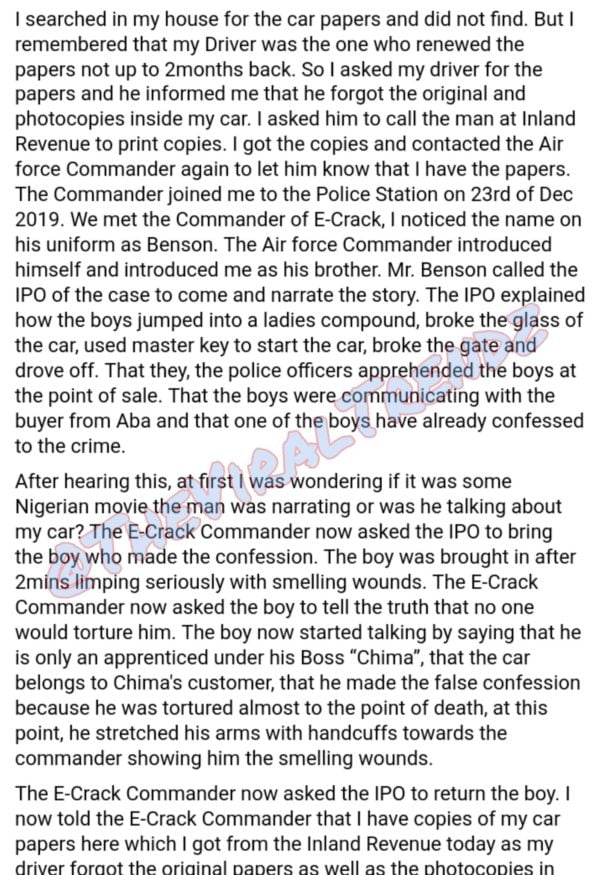 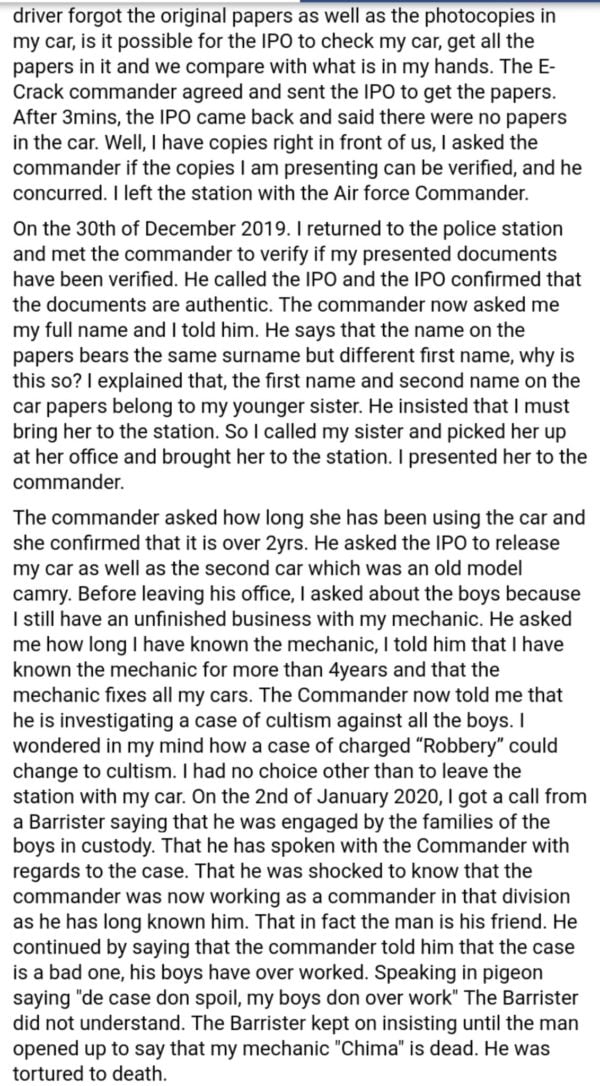 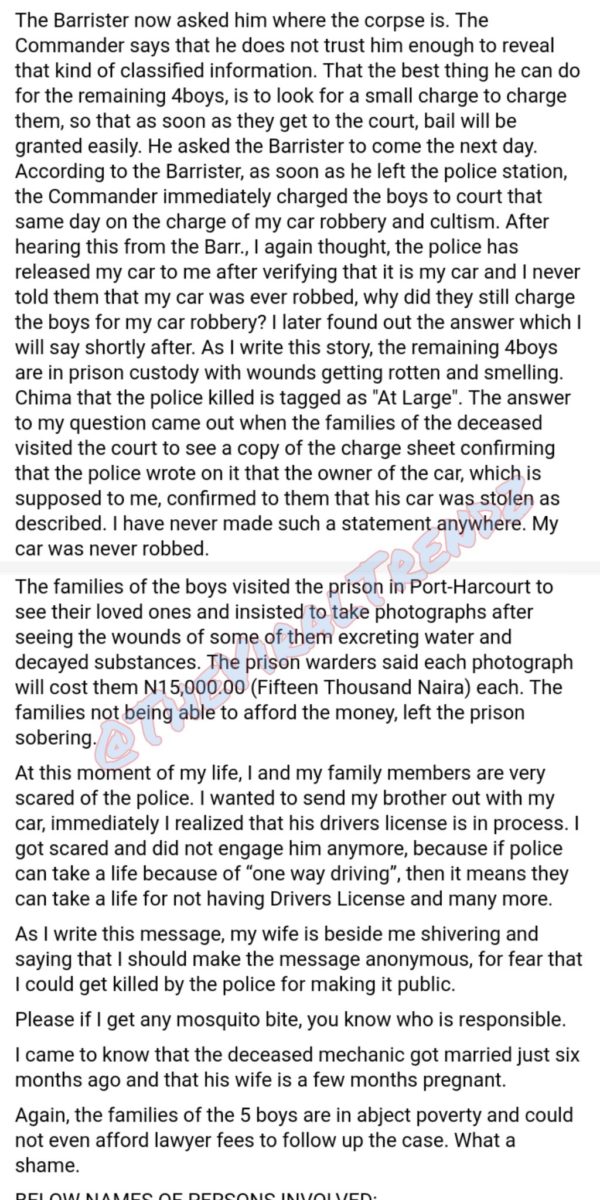 The heart-wrenching tale has since sparked outrage on Twitter as users have united with the hashtag #JusticeForChima to register their annoyance.

“Chima POLICE killers MUST be brought to book,” a Twitter user demanded.

“To start with, The IG of @PoliceNG should resign for how horrible the Force has become under him.
I hope by now, those police officers that killed Chima are already in detention. They should be charged for Murder.
Apparently, the Police can’t be reformed. #JusticeForChima,” another user said.

Here’s what some Nigerians had to say:

I woke up to the sad news of the murder of one Chima In Portharcourt by men of @PoliceNG. We’re gradually getting to the point where citizens will take laws into their hands & challenge the madness of the @PoliceNG. The State CP must account for the life of Chima #JusticeForChima

Almost every family in Nigeria has a relative who is a police officer. Either nuclear or extended family. Pls let us start talking sense into their skulls. Ask them this question "what if I'm d one?" This wickedness mixed wit madness must stop #EndPoliceBrutality #JusticeForChima

To start with, The IG of @PoliceNG should resign for how horrible the Force has become under him.

I hope by now, those police officers that killed Chima are already in detention. They should be charged for Murder.

Apparently, the Police can't be reformed.#JusticeForChima

Because you’re police officer
Because you need money
Because you holds a gun
You guys beleive you’re a god
You guys have failed the citizens
The Nigeria government as been failing since 1960 and they are still failing till date!!! Back to back #JusticeForChima

Nigeria is a failed state. The lives of common citizens can be wasted for no reason by the police.

I would have been dead like chima, or in prison like the other 4 boys 10 years ago from the hands of Area F police station in Lagos.

Nigerian Police is your number one enemy!!!

I repeat, Nigerian police is your number one enemy!!

They're not protecting us anymore, they're killing us everyday.

Untill FG reforms police, Police is not your friend.#JusticeForChima

This is extremely horrible and sad at the same time. Feels like a movie script that no one would ever imagine innocent lives are being treated like this.

Hopefully this won't end up as one of the regular 24-hours social media noise without justice. #JusticeForChima https://t.co/QEsXPu5xxd

The police is our friend I've never understood that statement and I'm not sure if I ever will. U think that holding a gun to ur hand makes u a God, constantly disregarding the lives of civilians news flash #JusticeForChima pic.twitter.com/R8lkqVulaj

This story is so sad, I feel defeated reading this. How is this even a country? How do we live like this ?
Re the Nigerian police even human ?
Who did this to us? #JusticeForChima pic.twitter.com/g1N0zL6ZKp

When you caution a policeman against torture, they think you’re stoping them from doing their job but in the real sense, you’re actually saving them. How do you explain #JusticeForChima tweets to his parents/loved ones? How do the police culprits explain to their families too?

My heart bleeds for Nigeria. How did we get here? What happened to our values? Is it too much money or lack of it? No more regard for human lives… now we have to run away from the people who are meant to protect us???

I stay in Port Harcourt & the rate the Police are extorting money from people is ludicrous. They & the bad guys work hand in hand. A thug will collect someone's phone & wallet right in the Police nose & they'll just ignore & in the end, they'll get their shares #JusticeForChima

The law is clear, it's better to let a 100 criminal abscond than to convict one innocent person, the number of innocent persons the @PoliceNG has ruined their lives is unimaginable, innocent lives in prison and dead as a result of activities from rogue officers! #JusticeForChima https://t.co/9ylyPg6qzD

Somebody once said that the armed robber is far better than the @NigeriaPolice, it was fun to me but i later got into deep thought about it and saw some sense in it. Reading the story on #JusticeForChima makes me weep bitterly for my beloved country.😭😭

I always say this, if u ever hear I’m running for the office of d president or my husband is, I advice the Nigerian police force to ensure we dont win cos if we do, I will be coming for them all. I will even visit the sins of the fathers on d newer generations#JusticeForChima 😭 pic.twitter.com/E8T4OZYYJF

Life is hard, Africa is difficult, Nigeria is hell!! Safe return to your home ain't guaranteed even if you go to the next street. May my children not witness this hardship 🤢. May God give the deceased family the fortitude to bear the loss.#JusticeForChima

The Nigerian Police is the most corrupt, insensitive & reckless public institution in the world.

This country is so messed up. To imagine our law enforcement agencies are the ones doing the work of Armed Robbers and Hired killer. The governments are definitely sleeping. #JusticeForChima