Love isn’t for everyone, says Peruzzi

Tobechukwu Okoh, the Nigerian singer better known as Peruzzi, says love is not for everyone.

The 32-year-old songwriter took to his Instagram story on Sunday to share his opinion about love and relationship.

He also urged people not to push for relationships that will end up ruining their emotional lives. 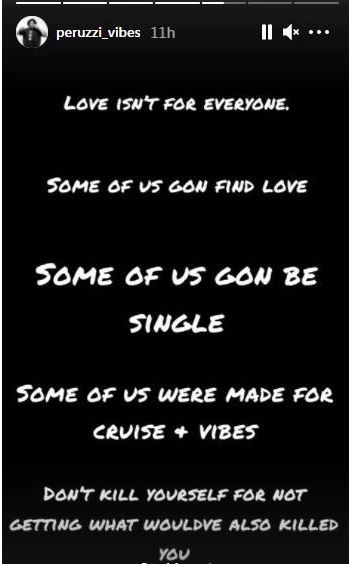 In April, following the release of his last album ‘Rum and Boogie‘, the singer had claimed he had never been in a relationship.

“I’m seeing many people but nobody is seeing me back. It’s a problem. No, I’m not actively in a relationship. Well, I’m sleeping with somebody. These days I run away, wahala no dey finish. My exes have turned feminists,” he had said.

When asked if he thinks relationships are overrated, he replied: “I don’t know, I haven’t been in a relationship.” On being single, the singer went ahead and teased: “It’s just crazy. Single life, I’ll just keep sleeping with somebody.”

The singer has continued to pull the strings since he was signed by Davido. He has also collaborated with several other renowned musicians and won awards as well as recognition.

But a few months ago, Peruzzi had reacted to the popular claims about him being a cousin to Chioma Avril, Davido’s fiance, saying: “You know how you’ll be related but not blood-blood. You’d be like ‘my cousin, my cousin’ and everyone runs with that.”

The singer had said that it’s absurd for some people to accuse him of sleeping with Chioma.

Peruzzi had also narrated how he once lost N400,000 given to him by Davido for his trip to Dubai.