The Legend Series: Me, marry again? That is madness, says Jide Kosoko

For 53 years, Jide Kosoko has been a constant figure in Nigeria’s film industry; he has captivated millions with his on-screen wit, snark, sarcasm, and no-nonsense demeanour.

Kosoko is arguably one of the most beloved television personalities in the country, owing to his consistency and interesting delivery of whatever character he’s portraying.

For one who got into the industry at the age of 10, Kosoko shows no indication of throwing in the towel anytime soon.

Without any iota of regret or thoughts of what could have been, he trudges on — on the only path he loves to travel, mixes with both young and old as he continuously writes his name in the sands of time.

On the maiden episode of TheCable Lifestyle’s The Legend Series, Kosoko talks at length about his career thus far, marriages, polygamy, his children in Nollywood and the legacy he’d like to leave in his wake.

As a legend, what part of you stay in the industry has been most memorable?

Well as far as I am concerned, it has been action, action, action from the onset and I consider every moment memorable especially when we started. You know we started it from the Yoruba sector; the Yoruba theatre industry started it by the experiment of Doctor Ola Balogun in 1976, when we produced a film, ‘Ajani Ogun’. That film was an experiment using the popular stage actors of the Yoruba genre to produce a film. It changed, it blew up the theatre, from then we started producing films. We moved over to video when the structural adjustment program (SAP) came in 1985. When we couldn’t raise enough foreign exchange to produce our films for post productions, the experiment of the video came in and till date that is what we have been doing. So the experience of that period is highly memorable. If we had not taken such step and action, we may not have what we call an industry today.

What aspect of stardom is a pain in the butt for you?

Well, in my own case, personally, you know I am a polygamist and unfortunately I lost my wives somehow. It was a very strong distraction but I was fast to hold myself up and put it behind me regardless of whatever anybody says. I have chosen to live, I want to live and finalise the job I am doing. 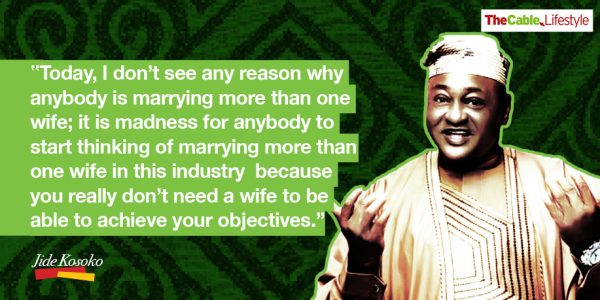 Have you ever regretted being a polygamist?

Like any other human being, yes. The aim of getting into polygamy was like a necessity for people like us in the ‘Alarin Joti’ union. You need your wife to be part of what you are doing so that they can give you necessary support, which was then. Today, I don’t see any reason why anybody is marrying more than one wife; it is madness for anybody to start thinking of marrying more than one wife in this industry because you really don’t need a wife to be able to achieve your objectives. Even then, it was more of emulating our leaders that made people like us to get into in stupidly. We still thank God almighty, the country was good enough then to accommodate us and our problem. It was a bit easy to raise children because things were a lot better compared to now.

What shocked you the most about the deaths of your three wives?

What will shock me? Nothing, death comes whenever it wants to come. They are all natural.

The incidents, are they still a painful memory?

What are you saying? They have children for me and I have too many things in common with each one of them. The memory will continue to be there, especially Rita. She was my partner in the industry and then it was even painful when she died of something I have been nursing for 27 years. She died of diabetics and I have been diabetic since 1996, so that means my ability to manage my health does not work for her. There are so many things she wasn’t able to control, I don’t want to go into all that.

Will you ever remarry?

That is madness. If I get married now, what will you say or think? I have grand children and by the time I would be 75 years I should have a great grandchild, so what are you talking about? What do I want to do with more wives? 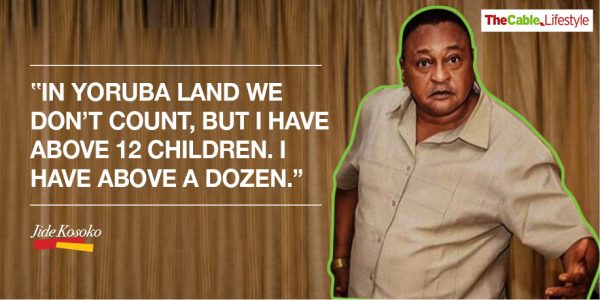 How many children do you have?

How was life as an actor who was always in the spotlight while raising a family?

The challenges are enormous, you know that people are eager to know what you are doing at every given time, but to me it helps to shape us. It helps me to be courteous in all I do. It makes me to be conscious in my actions at every given time, like any human being we have our different challenges and excesses but I thank God my being an actor helps a lot to caution me in so many ways.

You have children in the industry. How many in total?

I have about five now, if not six in the industry. One is in Europe practicing, one is in America practicing, one at home, I have three steady, and one is a director while the two ladies are actresses.

Does it make you proud to see them walking in your footsteps?

I am always happy that my children are taking after me, that means the job I am doing is good.

Did you encourage them to join the industry?

Yes, of course I did. Don’t forget they were born into it, From their youthful days we make use of them as kid actors so they continued doing it till they grew up. So it is part and parcel of them.

Before venturing into acting, what other ambition did you have?

Well, I must confess, this was my very first passion and you know [it started] at the tender age of 10. So which ambition will I have gotten other than my interest to act? I stayed in the same vicinity with the likes of Hubert Ogunde and I was so close to the family, some of the children are my friends. My mum is also very close to family. I had free access to their studio.

Is the movie industry as profitable as it should be?

Well, it depends on which angle you are looking at. If you are looking at the finance and the money coming in, I will tell you we are not doing too badly as far as I am concerned, but if you want it so huge for everybody like that, you may be wrong because the industry is relatively young, we are still building and we will continue to build until we actually get there.

What more can be done to bring profitability to the industry?

Already, too many things have been put in place. Our individual structures need to be well packaged, then collectively the industry needs to structured. So gradually we would get there. Like I used to say, I am a strong believer of the motion picture council, If the motion picture council is in place, I am very sure we will have an opportunity to coordinate ourselves properly and follow the ethics properly so that we can be able to move ahead and decide for ourselves what and what a professional actor should do, the responsibilities of a producer, and people working behind the camera. We set out the standard and the standard will help us get a proper description. Frankly speaking, a lot of efforts are being made now, government is involved in getting us some cinemas, some individuals are actually investing hugely and those are the things we need that will change the face of our industry. 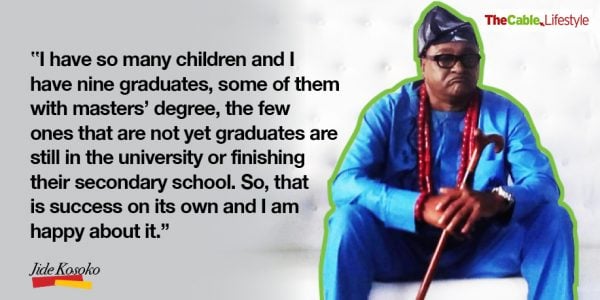 Has fame and celebrity status been commensurate to your earnings over the years?

This is the only thing I have been doing for the past 53 years. I have so many children and I have nine graduates, some of them with masters’ degree, the few ones that are not yet graduates are still in the university or finishing their secondary school. So, that is success on its own and I am happy about it.

What was it like growing up at a time when there was no technological disruption and social media?

It was fine, I must say. We made do with what we had and growing either personally or industry wise was more like a passion thing. It is like the passion we had for what we were doing helped us. We were not seeing it as a big deal or as a business; we were seeing it as doing what we like doing best.

How would you rate the quality of present-day movie practitioners in comparison to when you started out?

There are a lot of new innovations now and people are doing their best. We have quality practitioners.

Of late, many actors have been lost to terminal illnesses. What can be done to curb that?

Not many actors, many Nigerians. It is because of our name that makes it look as if we are the only ones dying. A lot of people are dying. This morning, more than one thousand have died and more Nigerians will still die. One way or the other something will kill somebody. When you talk about our own aspect, I will continue to advice the younger ones of the need to take their health matters seriously. So it is important and I think a lot of them are helping. I can see that Fred Amata, Dele Odunle are making good efforts to look at the health issue.

What kind of legacy do you want to leave behind as an actor and family man?

Omoni Oboli: Growing up in a broken home inspired me to direct ‘Moms at War’