Jada Pollock goes emotional as Wizkid claims to be single

Jada Pollock, manager and baby mama to Wizkid, has shared a cryptic post after the singer claimed he is single.

On Monday, the ‘Ojuelegba’ crooner took to his Snapchat handle to reflect on his love life. In a terse post, the musician claimed he had been “single for so long”.

“Been single for so long. Gotta find me one or two,” he had written.

It remains to be seen if the singer was joking or if he actually meant his words.

A few hours after the post, Pollock went emotional in a Twitter rant. In one of her posts, the talent manager, who recently welcomed her second child with Wizkid, wrote: “controlling emotions”.

She also replied to a user who insinuated Wizkid had broken her heart.

Quoting the tweet, Pollock wrote in a now-deleted post: “Taking arguments to social media is never going to end well.” 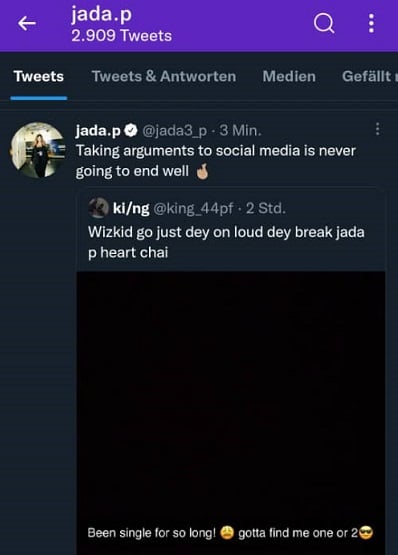 The talent manager’s post has fueled speculation that all may not be well with their relationship.

Pollock and Wizkid met in 2012 when she was still managing Akon.

The music star also has children with Shola Ogudu and Binta Diallo.

Davido to star in another Hollywood movie — after ‘Coming 2 America’