India Arie, the Grammy-winning US singer, has described the music industry as “deceitful and racist”.

The music star, who last released a studio album in 2019, spoke of her experiences in the music industry over the years.

While taking a trip down memory lane in a series of Instastory posts, the 44-year-old songwriter said the music industry was “trash,” adding that it stole from artistes.

She said she was yet to heal from some of the fallout of the industry as it shaped her life in ways she “can’t get back”.

While it remains unclear what exactly triggered the rant, Arie added that she was made to feel like she wasn’t beautiful and that she paid a very high cost to be heard.

She, however, said the journey was worth it as she has exponentially paved the way for younger creatives. 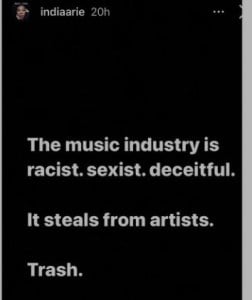 “I’ll never heal from all of it because some of it shaped my life in ways I can’t get back. But I love who I am. So I imagine the journey was meant to be.

“But those old pictures, the industry made me feel like I wasn’t beautiful. I can tell you some stories, honey. But, in truth, I was just way ahead of my time. I used to really try to do everything right. Now? I do what’s honest.

“I’m grateful to have been heard. But I also paid a high cost. And for anyone who I paved the way for, you are why it was all worth it. I have grown free and more beautiful.

“So the journey was all worth it and my most powerful days are still to come. To everyone in the industry who hurt, sued, played, stole from, betrayed me, thank you.”

Arie, who released her debut body of work in 2001, currently has seven studio albums and one EP to her credit.

My recent songs based on personal experiences, says Ruger

Akah Nnani: How movie ‘Man of God’ lifted my career