‘I was detained in Dubai for abusing security officer, not smoking’ — Tonto Dikeh hits Bobrisky

Tonto Dikeh, the controversial Nollywood actress, has revealed why she was arrested and detained in Dubai.

In the past few days, the actress and Kemi Olunloyo, the journalist, have engaged in a war of words on social media.

Amid their taunts and threats, Olunloyo had alleged that the movie star is in possession of a gun and had been using hard drugs.

Tonto, however, denied the allegations while threatening to pay Olunloyo a visit and “run her up on the streets” if she doesn’t back up her claims with proof.

Weighing into the fight, Bobrisky said Tonto can’t do anything to Olunloyo, because he got her back.

The crossdresser, who used to be “best friends” with the actress, also admitted that Olunloyo’s allegations were “indeed true”.

The Snapchat celebrity claimed Tonto was once arrested and detained in Dubai for being drunk and smoking weed.

Reacting to the cross-dresser’s claim, the 36-year-old film star admitted that she was arrested in Dubai, but not for smoking weed.

In a post on her Instagram story, the movie star said she was arrested for “illegal filming and verbally assaulting a security officer” in Dubai. 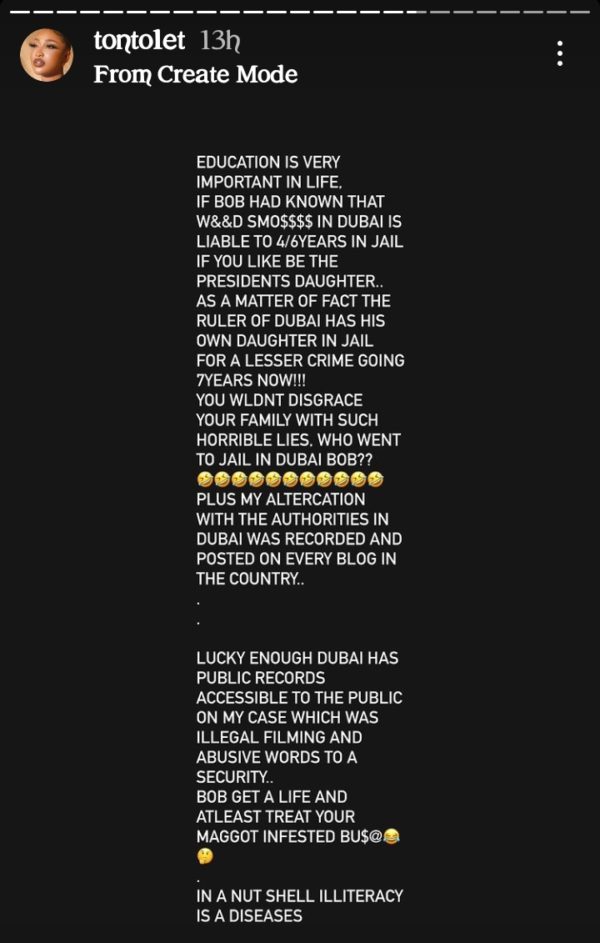 “Education is very important in life, if Bobrisky had known that weed smoking in Dubai is liable to 4/6 years in jail, if you like be the President’s daughter,” she wrote.

“As a matter of fact, the ruler of Dubai has his own daughter in jail for a lesser crime going years now!

“My altercation with the authorities in Dubai was recorded and posted on every blog in the country.

“Lucky enough Dubai has public records accessible to the public on my case, which was illegal filming and abusive words to a security officer. Bobrisky get a life.”

Rapper, Wale, reacts to being sued for ‘skipping’ One Africa Music Fest