Idris Okuneye, the self-acclaimed Nigerian transgender better known as Bobrisky, has renewed his feud with Tonto Dikeh, the actress.

The latest verbal war seemed to be because of Kemi Olunloyo, the controversial journalist.

In an Instagram post on Monday, the 30-year-old cross-dresser also used the medium to demand from the actress what he claimed to be “N5 million you are owing me.”

Trouble started a few days ago after Tonto and Olunloyo engaged in a feisty war of words on social media.

The actress had last week called out the journalist over her allegation that she’s into weapons and hard drugs.

Tonto also threatened to make sure Olunloyo “return back to jail”.

Reacting to the actress’ threat, Olunloyo said Tonto could not take her to jail because she knows her secrets.

The journalist also reiterated her claim that the movie star is in possession of a gun and had been using hard drugs.

Apparently cheesed off, Tonto had threatened to pay Olunloyo a visit and “run her up on the streets” if she doesn’t back up her allegation with proof.

Weighing into the fight, Bobrisky said Tonto can’t do anything to Olunloyo, because he got her back.

The crossdresser, who used to be “best friends” with the actress, also admitted that Olunloyo’s allegations were “indeed true”.

In the now-deleted post, the Snapchat celebrity claimed Tonto was once arrested and jailed in Dubai for being drunk and smoking weed. 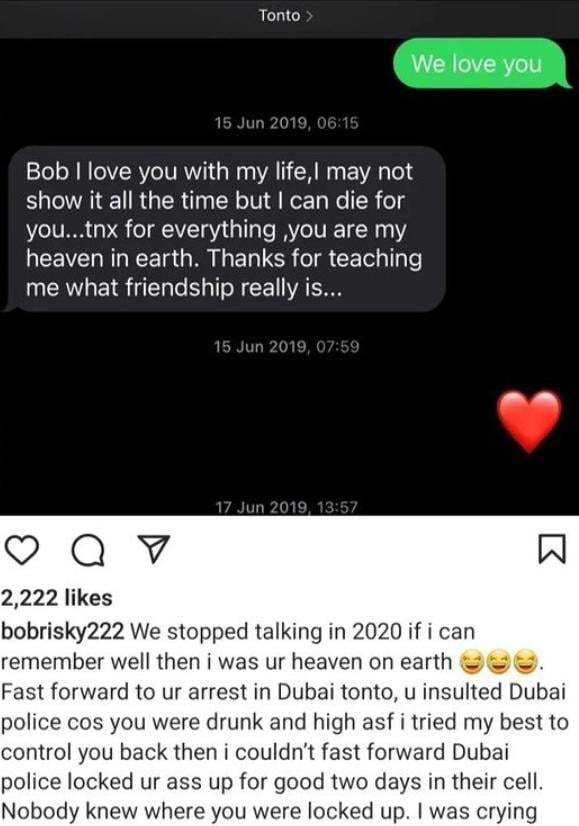 “We stopped talking in 2020 if I can remember. Well then, I was your heaven and earth. Fast forward to your arrest in Dubai Tonto,” he claimed.

“You insulted Dubai police cos you were drunk and high asf. I tried my best to control you back then, I couldn’t.

“Fast forward Dubai police locked your a** up for two good days in their cell. Nobody knew where you were locked up.

“After two days you were released and the police collected ur phone and weed they caught you with you and charge you to court. I removed my SIM card and gave you my phone just to make sure you quickly post some pictures on ur page so that Stella and other blogs won’t laugh at us.

“I paid for our hotels bills feeding. We were stuck in Dubai for three months all ur mouth you had no one to save your ass. Even ur so-called boyfriends then stop picking ur calls cos you were giving them so much headache, I was the only soul who stood by you.

“Fast forward when an influencer paid me then to influence for her she got angry and ask me to refund her cos I was with you in Dubai instead of doing her job I begged that lady to send some of the hair for me Dubai so I can be working since I was stocked in Dubai with you.

“I was with you for three months then you didn’t see as a bad friend. Fast forward, you were wearing all my gowns I bought to wear in Lagos just because you didn’t come with enough cloths till now many are still with you.

“I gave you 1m to add to fine Dubai police gave you for seeing you with weed. Fast forward, Tonto after two months ur rent in Abuja was due, ur estate payment was due, ur Son needed some money to feed we agreed after the third month I will fly back to abj to sort those bills for you. I flew back to Abuja and I bob sorted all d bills for you.”

Bobrisky had in September last year apologised for “humiliating” Tonto during her failed relationship with Prince Kpokpogri.

In December 2019, on the occasion of their four-year anniversary as friends, the cross-dresser had promised the actress “loyalty till death”.

Jada Pollock: It is degrading to be called Wizkid’s third baby mama