Few days ago, there were reports that the 39-year-old actress got married in a private ceremony in London, a day before her birthday but there was no official announcement to the effect.

Akindele, who is popular for her comedy series, Jenifa’s Diary, has now added “Bello” to her Instagram name.

The Jenifa actress was formerly married to Kehinde Almaroof Oloyede in 2012 and the marriage was dissolved after a year due to what she described as “irreconcilable differences”. 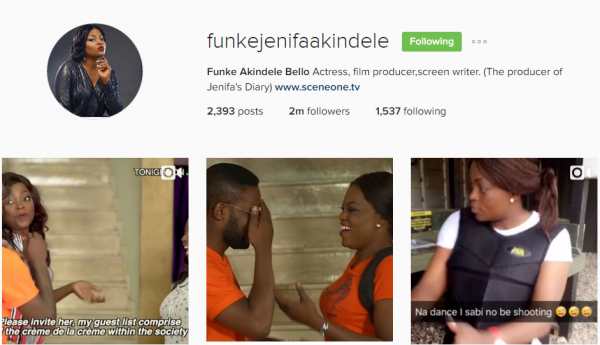 On Snapchat, a social media platform, JJC has been sharing videos of Funke Akindele engaging in various activities and even described her as “family” in one of them.

Akindele had refused to share news of her relationship with JJC saying it’s her private life.

“I really don’t like discussing about my private life anymore because it pays to keep that part of your life secret. A lot of people are watching and sometimes you read a lot of negative comments about you which could make you want to derail, so it is better to keep matters of the heart close to the heart,” she said in an interview.

“I am the one in it and I know what is good for me. I am sorry I don’t want to talk about anything that has to do with my private life”, Akindele added.