Cindy Okafor, a former Big Brother Naija (BBNaija) housemate, has been accused of breaching her agreement with an online fashion dealer.

The fashion dealer, named Isabella Edem, called out the reality TV star for failing to acknowledge her brand after she allegedly received a free dress from the store in exchange for online promotion.

Shortly after the reality star took to her Instagram page to share a photo of her clad in a beautiful fringe dress, Edem, who runs Beunique B, a fashion store on Instagram, jumped on the comment section to vent her annoyance over the alleged breach of their agreement.

She claimed the BBNaija star refused to give her credit for the cloth by tagging and mentioning her brand as agreed.

She also claimed that she had contacted the celebrity on phone to correct the error but Cindy had simply hissed and hung up on her. 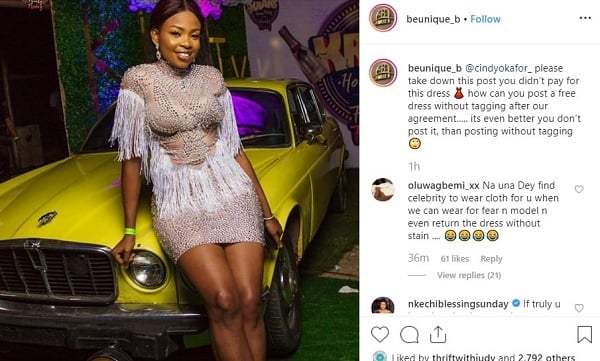 “Please take down this post, you didn’t pay for this dress. How can you post a free dress without tagging after our agreement? It’s even better you don’t post it than posting without tagging,” Edem wrote.

“I called her. She hissed and cut the call on me. Who does that?”

A few weeks after she got evicted from the 2019 edition of the show, another store owner identified as Megmario Empire had similarly accused Cindy of posting a picture wearing their shoe without tagging the store for promotional purposes — unlike they had agreed.

Davido: Many people thought I’d be a failed musician