Hauwa Muhammed, the self-acclaimed sex therapist better known as Jaruma, has declared her interest to contest for the 2023 presidency.

In several posts via her Instagram page, the entrepreneur — who is not known to be a member of any registered political party in the country — asked people to support her ambition.

The brand influencer also said she is determined to break the jinx in the country’s political landscape as the first female president of Nigeria.

Adopting the slogan “Jaruma for the masses”, the sex therapist also updated her Instagram bio to include “first female president of Nigeria.”

She accompanied the post with what seemed to be a campaign flyer with the inscription: “meet your next president 2023 Jaruma.” 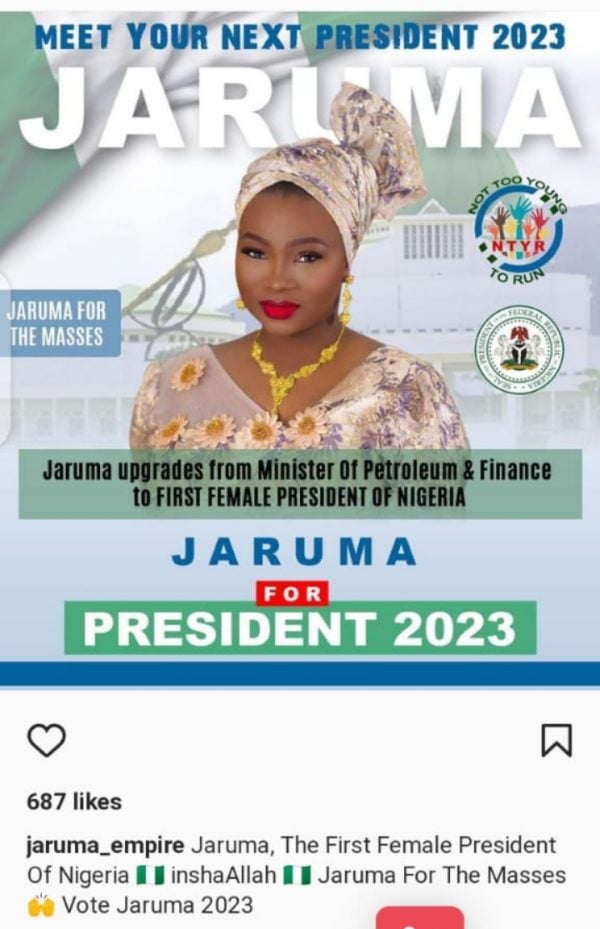 The flyer carried a logo of the ‘Not Too Young To Run’ movement — which is not a political party in the country.

Her announcement comes at about the same time when an upper area court in Zuba, Abuja granted her bail after she spent four days in prison.

It also comes as she shared a video of herself donating food items to the inmates of the Nigerian Correctional Service in Suleja where she was detained.

In one of the clips, she disclosed that she would be donating the sum of two million naira to bail “innocent” inmates and those with minor charges.

The police had charged Jaruma with false news publication, intimidation, and defamation of character after a petition was submitted by Ned Nwoko, a billionaire businessman.

TheCable Lifestyle had earlier examined some of the issues arising from the arrest of the sex therapist.

I wanted to embrace him, says lady who claimed to grab Ruger’s crotch