The ‘OBO’ crooner and Chioma Avril Rowland, his estranged fiancée, had recently put the seeming differences between them to celebrate the second birthday of Ifeanyi, their son.

On Sunday, Gifty took to social media to hail the musician, adding that “he’s always there for his kids” regardless of the pair’s sour relationship.

“No papa better pass Davido. Periodt. No matter the saga it is between him and his relationships, he’s always there for his kids; come rain, come shine. And that, I respect and love him,” she had written in the now-viral post.

But her comment did not sit well with Etinosa, who accused the reality TV star of “chasing clout.”

The actress also wondered why Gifty would single out Davido for praise for doing what is expected of him as a father to his children.

“If you want to talk to your father and your two different baby daddies talk to them directly but please leave our fathers- my dearly beloved father out of it. Trying to even use OBO to settle your family problem,” she wrote.

“Nice try. Not Nigerian women low-key teaching men to be badly behaved. A man does what he is supposed to do as a father to his own child and some low self-esteem women start singing his praises like he’s done something extraordinary. The same way we worship politicians for doing half of what they were actually elected/paid to do.

“I have never seen a woman being praised and worshipped for breastfeeding her own child. If it’s a big deal that a man attended the birthday party of his own son and that has suddenly made him the best father in the world then Omo! Your childhood was rough oh. Sorry.”

In a follow-up post via her Instagram Story, Etinosa apologised to the reality TV star over her initial outburst.

The movie star said her earlier reaction to Gifty’s post was because she generalised her claim, adding such could undermine the efforts made by other parents. 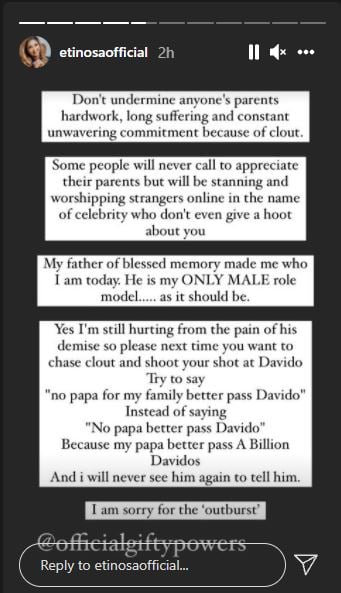 “Some people will never call to appreciate their parents but will be stanning and worshipping strangers online in the name of a celebrity who don’t even give a hoot about you.

“My father of blessed memory made me who I am today. He is my only male role model as it should be.