Tiwa Savage: Some people will be happy when I’m no more

Tiwa Savage, the award-winning Nigerian musician, says some people will be happy when she is no more.

In a post via her Instagram story on Monday, the music star also disclosed that she was sad when she lost her dad and Obama DMW, Davido’s associate better known as ’44’.

She added that “at least they are no longer in this cruel place”.

“I was sad at the passing of my dad and 44 but at least they are no longer in this cruel place. Some people will be happy when I am no more,” she wrote.

Although it was not clear what informed her post, it may not be unconnected to the recent backlash trailing her leaked sex tape. 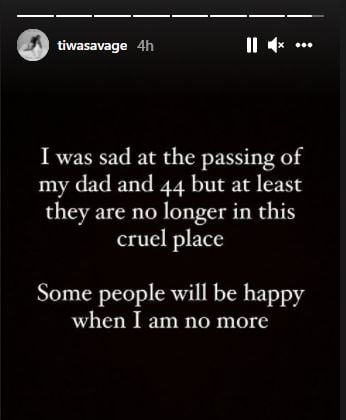 In the past few days, the ‘Koroba’ crooner has been in the public eye after a video showing an intimate moment between her and her new lover surfaced online.

The video has continued to elicit different reactions, with some Nigerians criticising the ‘Celia’ singer.

Amid the outrage, several celebrities including Mercy Aigbe and Harrysong had defended the mother of one with solidarity posts.

But Georgina Onuoha, the Nollywood actress, had tackled the celebrities who she claimed were doing Tiwa a disservice by celebrating what she termed her “mistake”.

Ossai Success, the aide to Ifeanyi Okowa, governor of Delta, had also called on the musician to apologise to Nigerians, describing the video as “an act of abnormality” that should not be supported.

Tiwa had earlier lambasted her critics, saying some of them thought the sex tape would destroy her.