DOWNLOAD: Wizkid finally drops ‘Made in Lagos’ album — after teasing for two years

After teasing for over two years, Ayodeji Balogun, Nigerian Afropop singer better known as Wizkid, has finally come through with ‘Made in Lagos’, his highly anticipated album.

The award-winning songwriter took to his Twitter page in the early hours of Friday to announce the release of the project to his numerous fans.

See the tracklist below: 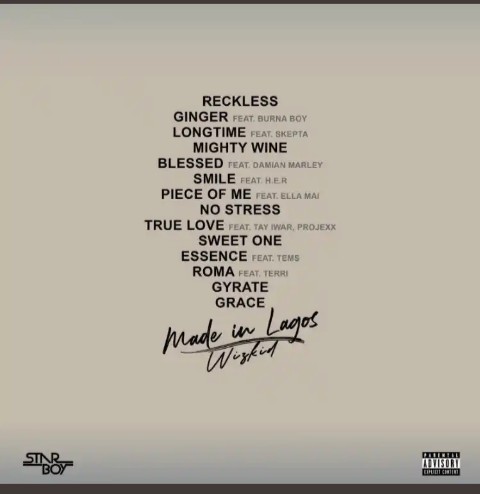 The body of work, which is his 4th studio album, has been teased and talked about for nearly two years, while Wizkid had made the release date a top-secret.

The singer had in August 2018 announced that the project would be put out later in the year — on October 1 — but the plan did not materialise.

He had also resumed work on the project — which he described “the best he ever made” — in 2019.

The songwriter had also postponed the album, which was set for release on October 15, over the protests against operatives of the special anti-robbery squad (SARS).

With the release, the ‘Ojuelegba’ crooner has finally settled the dust and speculation surrounding the album.

‘Made In Lagos’ is coming after the success recorded by the singer’s earlier albums — ‘Superstar’, ‘Ayo’, and ‘Sounds from the Other Side.’

Also dubbed Starboy, Wizkid began recording music at the age of 11 and released a collaborative album with the Glorious Five, a group he and a couple of his church friends formed.

He signed a deal with Empire Mates Entertainment (EME) in 2009 and rose to prominence after ‘Holla at Your Boy’, the lead single from ‘Superstar’ (2011), his debut studio album.

In 2016, he gained global recognition for ‘One Dance’, his collaboration with Drake, which peaked at number one in 15 countries, including the US, UK, Canada, and Australia.

Don Jazzy reveals why he’s yet to be married