Wizkid has revealed the date for the release of his next album.

In a couple of now-deleted tweets, the singer said the ‘Made In Lagos’ album will be released on October 1.

The ‘Fake Love’ singer posted and deleted the tweets in the early hours of Tuesday. 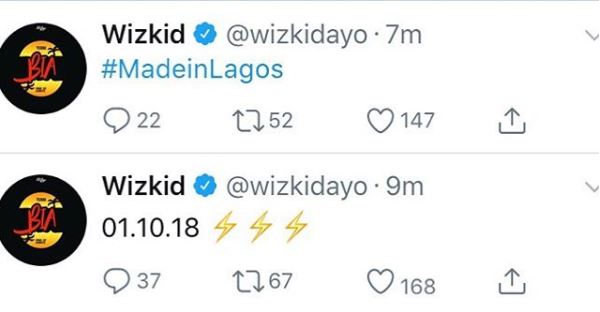 Since the release of his ‘Sounds From The Other Side’ EP in 2017, Wizkid has often talked about his imminent fourth studio album.

In an interview with British disc jockey Tim Westwood after his Afrorepublik concert at the O2 Arena in London, Wizkid had said: “The new album is called Made in Lagos, Wizkid Made in Lagos; 10 tracks, no features just straight Wizkid.

“My collaboration with Skepta is also in the works, it will drop very soon. I don’t want to say anything more on that.”

‘Bad Energy’, the singer’s collaboration with Skepta was released in June. The song is on the British singles chart.

Although the foreign media often called ‘Sounds From The Other Side’ an album, the singer has continued to insist that it is an EP.

The singer recently announced that Terri, a new member of Starboy Records, is set to release ‘Bia’, his first solo single.