Weird MC, the Nigerian rapper, has teased Bovi, the comedian, not to be like Chris Rock, the US comic and actor.

Bovi had, on Monday, posted an Instagram video of himself making a joke while anchoring an anniversary event.

“It was an honour doing comedy last Tuesday at Eko Hotel and Suites. I will be serialising my set here,” he said.

Reacting in the comment section, Weird MC teased him not to act like Chris Rock who earned a slap for his joke at the 2022 Oscars.

Rock had made a joke about Jada Pinkett, the wife of Will Smith, both of whom were among the award’s audience.

In her comment, Weird MC wrote: “Don’t do this Chris Style o.” 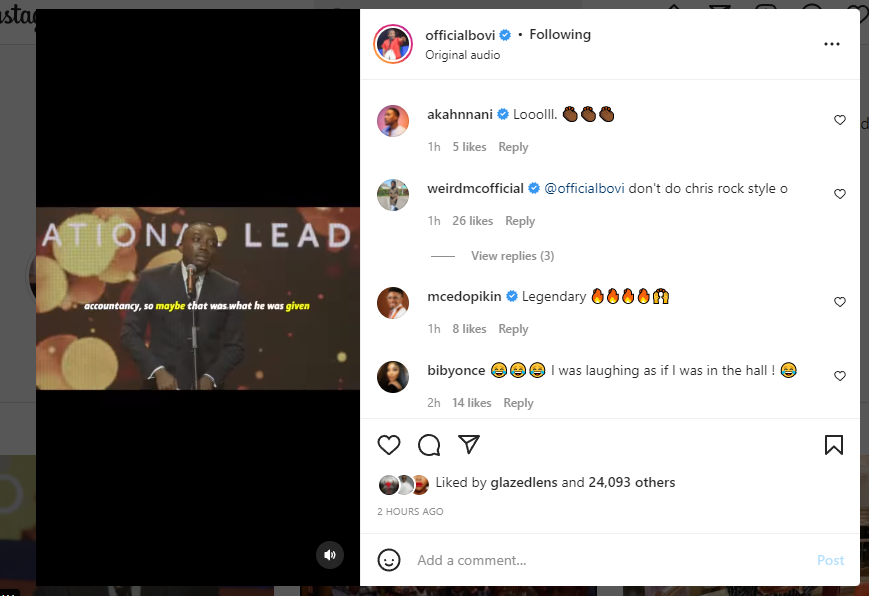 Weird MC’s comment comes after Ubi Franklin, the artiste manager, accused Bovi of making a joke about his kids.

Franklin had warned Bovi not to make his kids a topic for laughs, alleging he did the same thing at The Headies 2021.

“Comedy should not be used as a decoy to disrespect people on national TV. I’m struggling with stuff and trying to put myself together and you go on live TV to talk about my kids? Comedians need to know their limits,” he said.

‘Your legacy will live on’ — celebrities, fans pay tribute to DMX