David Adeleke, Nigerian Afropop singer better known as Davido, appears to have fixed 2020 for his wedding with Chioma Avril Rowland, his much-acclaimed girlfriend.

The talented songwriter took to his Instagram page in the early hours of Tuesday to announce this good news.

He shared a photograph of himself with friends and family from the introduction ceremony which held recently.

“First of all Introduction,” he captioned the photo.

He also used a wedding emoji to compliment the post. On his Instastory, the award-winning singer wrote “Get ur Trads ready!! #CHIVIDO2019. 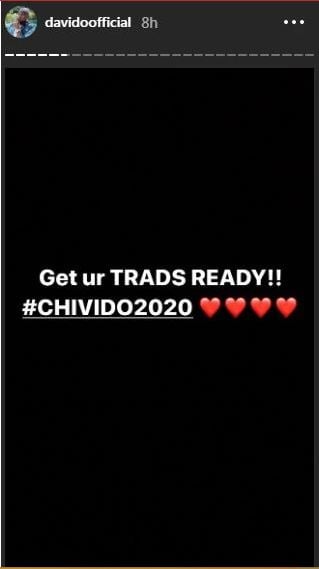 In the wake of the duo’s introduction ceremony, Adewale Adeleke, Davido’s elder brother, similarly congratulated the couple and disclosed that the Afropop star would tie the knot with his girlfriend in 2020.

”So happy! Love you both @thechefchi @davidoofficial #chivido2020,” he captioned a picture of the duo’s romantic moment.

Chioma, 24, is reported to have met Davido while studying economics at Babcock University.

The 26-year-old singer has, since, had a song ‘Assurance’ released in her name and has not spared any chance at flaunting her to his fans in social media posts and during concerts.

One of the highest points of their relationship was when Davido surprised her with a Porsche car worth N45 million on her birthday.