The Nigerian Twittersphere has been set abuzz in the wake of Davido’s response to rumours that he took Sophia Momodu, mother of Imade, his daughter, on a vacation trip to Ghana.

Photos of the award-winning singer and Sophia together started circulating on social media, shortly after the rumours emerged that he was having a fling with his baby mama and even took her on holiday to Ghana.

In a bid to clear the air, the ‘Risky’ crooner took to his Instagram stories to post a lengthy message warning “bloggers and purveyors of fake news” to desist from pushing false narratives that can destroy his relationship with Chioma Rowland, his fiance, whom he recently proposed to.

“I just want to drop a quick comment on the headlines of the silly blogs I’ve been seeing circulate about me taking the mother of first child on a trip to Ghana and really wish y’all will quit with it,” he wrote.

“You ALL know that I just proposed to Chioma recently and it would make no sense whatsoever for me to be doing such. My daughter’s mother had her business in Ghana with Afrochella selling Imade’s hair products at stalls and I was obviously booked to perform at Afronation.

“I simply gave her a lift for the sake of Imade who I didn’t want to be left in Lagos without her mom. It was either that or she flies economy. I don’t understand why you all would spread such rumours you know would do nothing but hurt my fiance and disrespect her family. 2020 is for positive energy. Get it with it.” 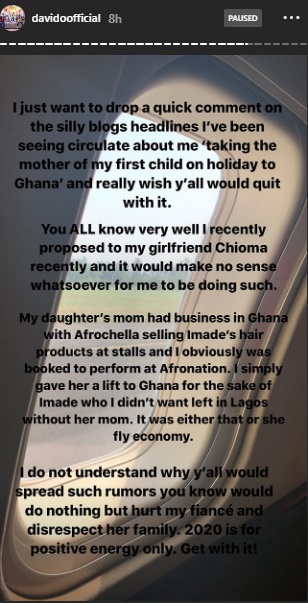 However, a part of the statement didn’t go down too well with some users who expressed their anger over the singer’s insinuation that his baby mama could only afford ticket for economy class.

While they labelled his statement “disrespectful”, another segment of internet users countered that he only explained why he gave her a lift and also doesn’t owe anyone any explanation.

“Davido’s explanation was rude, belittling and uncalled for. A total disrespect to Sophia,” a Twitter user said.

“Davido and his baby mama Sophia obviously have a child together, he gave her a lift to Ghana in his private jet because she had some “business” to take care of there. He is also engaged to Chioma & they have a child together. I’m struggling to understand what the issue is,” another user said.

I’m struggling to understand what the issue is 🤷🏾‍♂️

Davido’s explanation was rude, belittling and uncalled for.
A total disrespect to Sophia.

Davido’s problem is that he always take anything he see here on social media too personally.
You’re a celebrity and you think you won’t have haters? They will drag you, you will reply, they will abuse you, you will reply.. acting like he owes anyone an explanation.

I like how davido loves chioma and how he feels he needs to be better but putting other women down at the expense is a NO! You can treat your girl right without making your baby mamas feel less, make your point whilst respecting everyone for God’s sake!

Chioma and her Baba after reading Davido's write up about Sophia
pic.twitter.com/FMO2ZaWWqt

Flying economy to Ghana is over 100k. Since when do broke people spend that much on flight tickets?

I wanted to book Economy Flight to Owerri on December and I was seeing N65k -N70k, Owerri ooo not Ghana. I had to Japa and enter GIG

That’s what Davido mentioned and you people are calling disrespect? I don’t blame you

Some blogs reported the trip like he was hooking up with an ex. But you are blaming Davido, rather than the unfortunate bloggers.

“I gave her a lift to Ghana”
Pls how is this rude?

But you are angry cos the only lift you know is the one on Bajaj okada.

But ya'll know Davido didn't intend to make that write up come out the way it did. He just used a poor choice of words. Cos from what I've been seeing, they are cool

Y'all saying too much rubbish here tbvh.
Y'all made it look like Davido was keeping an affair with his bby mama away from Chioma. D guy came to make things clear nw y'all saying he was disrespecting Sophia… Y'all just b looking 4 shit to say when the guy did the right thing.

Am beginning not to understand davido again o…. why was he just mentioning Chioma and disrespecting her family Crap? … like seriously? You were not blind when you were still seeing Sophia back then!! So Why talking like sophia is shit to you now!! Abeg park well

Davido actually owes no one an explanation for giving Sophia a lift “IF” Chioma was aware before he did it.

Because whether he explains or not some of you will still look for a fault in everything.
He’s a good father and I admire the kinda love he has for Chioma. E plenty!

This Chioma, Davido, and Sophia matter is why women need to have their own money and own full life identity away from the man they have a child for.

Imagine the father of your child telling the world all you can afford is Economy class while he’s a millionaire.

IMO Davido shouldn’t have bothered explaining to us what happened between himself and Sophia. As long Chioma has no issue, he should’ve just left it like that

Davido made all of us proud when we saw pictures of him giving some good treat to Sophia and daughter. But pressure led him to what he did after such noble act. He is human for a fact. But I think he needs to learn from Tubaba and just may be Chioma needs to learn from Annie!

Davido didn’t disrespect Sophia Momodu with his response, he was simply trying to clear the air. Which wasn’t necessary Cos he owes no one any fucking explanation.

But you see Sophia Momodu? She’s lowkey a clout chaser and still wishes she was the main chick 🤷🏽‍♂️

I feel like Davido and Chioma need to understand that sometimes, the best way to deal with rumours/gossips is to ignore them.
People don't really care about the truth, they just need a story.

Davido's response to taking Sophia on vacation wasnt it at all.

Like who tf will give your baby momma a lift to Ghana if not you?

At the end of the day, Chioma is the perfect match for Davido. She has zero need for social media validation and seeks no public attention whatsoever. Just a quiet, private, lovely lady to compliment Davido’s over exposure to the media.

Chioma pls abeg ‘who’s your baba? Cos, Davido’s write up concerning Sophia shows that it is not Oju lasan.. Ife yi po kilode!

Tonto Dikeh: The best part of my body is my private part

Angelina Jolie: I separated from Brad Pitt for the wellbeing of my family