Ruth Kadiri, Nollywood actress and film producer, has advised upcoming actresses to build their relationships while struggling for their breakthrough in the industry.

The 31-year-old took to her Instastory to also let her fans in on what she hinted was the plight of most Nollywood actresses.

“Dear upcoming actresses. While you struggle to build up your career, if you are one of those who would eventually want to settle down, learn to build a relationship side by side. It’s hard. But try,” she wrote.

“Don’t wait till you are a star. Fame is a mirage, you do not know when it will come. When it eventually does, time might not be your friend anymore — the story of most Nollywood actresses.” 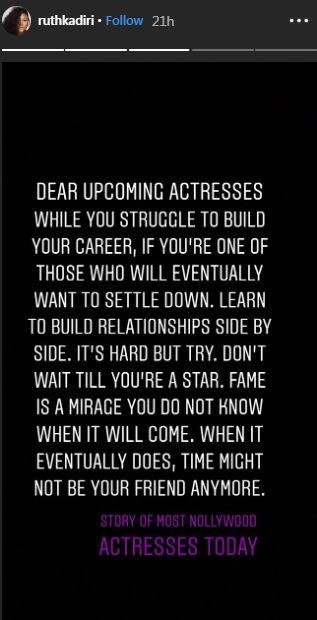 The talented actress made her acting debut with the movie ‘Boys Cot’ and has over fifty movies to her name. As a screenwriter, she has also written and co-written several movies including ‘Matters Arising’, ‘Heart of a Fighter’, and ‘Ladies Men’.

Ruth, who has severally been spotted wearing a wedding ring and goes by a new surname ‘Ezerika’, wouldn’t be the first to register such concerns about celebrity marriages in the movie industry.

Tonto Dikeh recently said that unmarried actresses in the industry are forced to recycle and date the same men in an unhealthy rivalry.

TheCable had put together its 2019 listicle of some of the most eligible celebrity bachelors and bachelorettes in the country’s entertainment industry.

‘I’m in pains’ — Adeherself speaks on ordeal with EFCC

Royalties: Banky W asked me to pour my anger on you, Samklef tells Wizkid

Bella Shmurda: Why I can’t have baby mamas