Bovi, Nigerian comedian, has called out Niyi Akinmolayan, the filmmaker, over the way he handled ‘My Village People‘, his latest movie.

The project, which is a comedy that chronicles relatable African folklore, was released on June 11.

The drama had started after Akinmolayan, who directed the movie, took to his Instagram page to promote the project alongside ‘Prophetess’.

“We have had an amazing year @anthillstudious_ the two leading films so far this year…” he had written in the now-deleted post accompanied by flyers of both projects.

But in a lengthy post via his Instastories, Bovi described the filmmaker as a “clout chaser” for sharing the movie weeks after its release.

The entertainer also alleged that Akinmolayan had originally refused to identify with the project when it was released until it started pulling the strings.

Bovi, whose real name is Abovi Ugboma, said the director’s action had followed a slight disagreement that ensued between the pair during the shooting of the project.

“See this clout chasing, egoistic, inferiority complex driven director posting film that he’s deliberately refused to identify with since its release,” he wrote.

“Not like it mattered to me but once I heard all the sh*t coming from him and his body language, I was like how did I not walk away from this mess despite the warning signs. 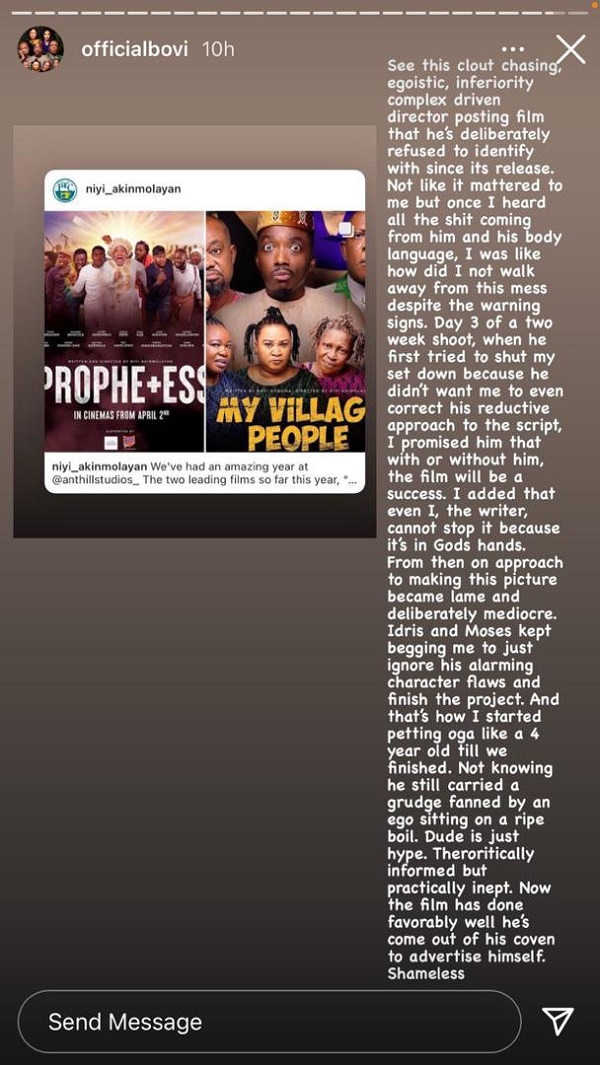 “Day three of a two week shoot, when he first tried to shut my set down because he didn’t want me to even correct his reductive approach to the script, I promised him that with or without him, the film will be a success.

“I added that even I, the writer, cannot stop it because it’s in God’s hands. From then on approach to making this picture became lame and deliberately mediocre. Idris and Moses kept begging me to just ignore his alarming character flaws and finish the project.

“And that’s how I kept petting oga like a 4-year-old till we finished, not knowing he still carried a grudge fanned by an ego sitting on a ripe boil.

“Dude is just hype. Theoretically informed but practically inept. Now the film has done favourably well, he has come out of his coven to advertise himself. Shameless.”

Akinmolayan has not reacted to Bovi’s outburst as of the time of this report.

Etinosa: l battled PCOS for 7 years before having a child