‘I will beat you up’ — Bovi, IGoDye lock horns over Uduaghan’s senate bid

Comedians, Bovi Ugomma and Francis ‘IGoDye’ Agoda, are in the middle of a war of words over the bid of Emmanuel Uduaghan to contest for the senate in 2019.

The former Delta governor recently moved to the All Progressives Congress (APC) from the Peoples Democratic Party (PDP).

IGoDye had questioned the ex-governor’s ambition, saying he has not done enough to merit another shot at public office.

He said: “After enjoying the executive position for (8) eight years, with allocation of 62.2bn a year × 8 years, over Five trillion nine hundred and seventy one billion two hundred million (5,971,200,000,000 ) within that period, nothing can be ascribed to you in terms of infrastructural and human capital development. This is enough reason why he shouldn’t seek any other elective position in Delta State.”

IF YOU CAN RENT 1000 KVA GENERATOR FOR 1,536,000,000 ( ONE BILLION FIVE HUNDRED AND THIRTY SIX MILLION ) TO RUN THE DOME EVENT CENTER, WHEN YOU CAN BUY THAT GENERATOR FOR 43 MILLION. WHAT WILL YOU RENT OR DO WHEN YOU BECOME SENATOR ? Life often offers us an opportunity to act,speak and do the needful at all time. I am destined to speak and act for the voiceless. However, As the Ukaid Goodwill Ambassador on making a difference Against corruption, I believe, that for us to collective prosper as a nation we all must speak and act against corruption. Remarkably, the fight against corruption has not being objective. The warm embrace and presidential hand shake given them after decamping expresses negativity in the fight against corruption. At this point in our Nation, the true value of our lives as citizens, will be appreciated if we look beyond our immediate status of comfort and build a patriotic ideology to protect our country from further abuse. In my civil quest to change and advocate for youthful leadership what is right,Charity must begin at home.In reflection of what should be ideal, Ex -Governor Dr Emmanuel Uduaghan born 22 October 1954 age 64 years, on August 6th 1999 age 45 years you became Commissioner for Health in Delta State, on 6 June 2003, Uduaghan was appointed Secretary to the Delta State Government and 29 May 2007 age 53 you became governor of Delta state.you should be be advocating for a younger candidate ,instead of the personal ambition to run for the Senatorial position in Delta State. After enjoying the executive position for (8) eight years, with a allocation of 62.2bn a year × 8 years, over Five trillion nine hundred and seventy one billion two hundred million (5,971,200,000,000 ) within that period, noting can be ascribed to you ,in terms of infrastructural and human capital development.This is enough reason why he shouldn't seek any other elective position in Delta State.

Bovi commented on the post by criticising IGoDye, accusing him of not speaking up when Uduaghan was a serving governor.

He described his colleagues’ sentiments as “self-serving”.

In response, IGoDye said Bovi had been paid to defend the politician, referring to him as a “baby lawyer”.

He asked: “How much have you being paid to sell your hard YOUR hard earned reputation, as a beautiful Nigeria youth, that grew to become AKPO’S, now Bovi, only to be commissioned as a Baby lawyer by your favourite Governor Uduaghan? Someone whose children are graduating today in London while Delta State University is still in decay.”

I GAVE YOU AN OPEN CHALLENGE TO SPEAK FOR DELTAN'S BUT YOU MISQUOTED WINSTON CHURCHILL. BUT FAILED TO USE YOUR OWN QUOTES, AS YOU HAVE ASCRIBED INTELLIGENCE TO YOUR PERSONALITY. This is not an argument or fragmentation of your imagination that is contested,it is the truth against our people that they are using you to divert.I will not reply you again. How much have you being paid to sell your hard earned reputation, as a beautiful Nigeria youth, that grew to become AKPO'S, now Bovi,only to be commissioned as a Baby lawyer by your favourite Governor Uduaghan? Someone whose children are graduating today in London ,while Delta State university is still in decay. what made you to accept a baby lawyer's appointment ,just to support those that have caused pains to millions of Nigerians? who sleep everyday without a meal. It is not about me, but for the sake of our future. As you are reading this,I want you to realise that someone's son or daughter is in about engaging in something that is disspeakable, to him or her because of survival,either to be in school , to support their parents who are now old,sick,pensioned denied and living in a rented apartment, while those you are defending are living in glass houses,their children are flying private jets across the world,with no better qualification than those unemployed.This is what I was against before they tried using you to divert the truth. Why would you chose to become the scapegoat used to cover the mess in exchange of a salty porridge ? So that dem go say Bovi and igodye dey beef.This is between me and Dr Uduaghan please take yourself out. You have your right to support him to be a Senator, because you have a very close relationship with him, I understand, because na your house he dey so. Tell him the honest truth, that Amb Igodye said he should give room to other young Deltan's to go for the Senatorial post and not him. He has been in active governance for 16years and he did nothing for our people. What more can he offer? How much or how many show dem wan give you? I be one man squad with grace. I will rather stand and die but speak the truth ,than to sell my conscience for money,

Following IGoDye’s post, Bovi on Saturday took to Instagram to hit back and threaten to beat him up.

“Unlike you, I do not dabble in politics. It’s not my turf. My take on politics comes up mostly on stage,” he wrote.

“I’m friends with many governors and politicians simply because they love my work. The present Governor of Delta state was at my mothers funeral as our family’s guest. Unlike you, I have not gone to burden him with self-serving proposals. Please note that I didn’t bother his predecessor too.

“That’s always been your game. I was simply calling you out the way you called the governor out. Now look how you’re rattled and running all over the place! Francis, your legacy in the comedy industry cannot be questioned but your shallow intellect has never been up for debate.

“If you thought your actions through, you will know that after your multiple visits to the ex-governor, cap in hand, including the one you showcased only a portion of the video on the 30th of April this year, you have no moral standing to speak scathingly and publicly.

“PS- if you ever mention my children again, I will physically beat you up.”

The comedian has since deleted the Instagram post where he threatened to beat up IGoDye, but not before a screenshot was obtained. 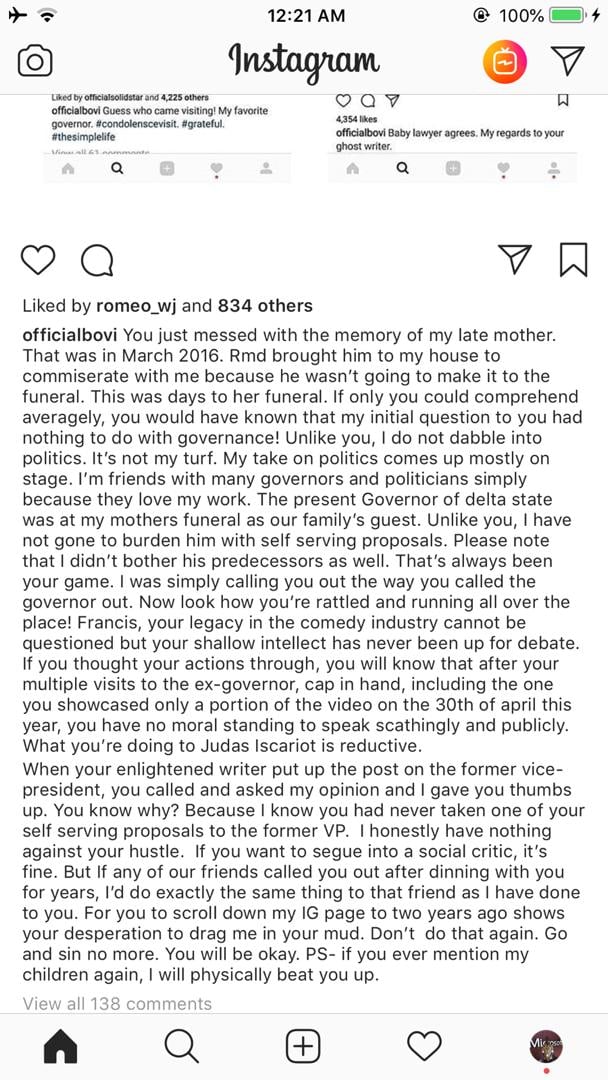