Bobrisky, the self-acclaimed Nigerian transgender, has vowed to ensure Sabinus, the comedian, is jailed over an advert deal.

The drama started when the crossdresser shared a video of an entrepreneur calling out the comedian over the business deal via his Facebook page.

In the video, the lady, who identified herself as Nma, had claimed she requested an advert from Sabinus and paid “millions” for it.

She, however, alleged that Sabinus failed to deliver the advert within the two-week timeframe they both agreed on.

Nma further claimed that when Sabinus eventually did, he only put her name at the end of his personal content without her consent.

In a post accompanying the video, Bobrisky had asked the comedian to delete the content involving the lady — who he called a “friend” — from his page.

“Mrfunny_ Take down my friends post on your page!!!!! You posted without her consent and the skit is sending a wrong narrative to the poor girls brand,” the brand influencer wrote.

“If you know Sabinus call him now and advice him before it is too late.”

Responding in the comment section, Sabinus, whose real name is Chukwuemeka Emmanuel, told Bobrisky to “calm down,” adding that Nma’s story “no clear.”

“Senior man calm down her story no clear,” he wrote in Pidgin.

Bobrisky, however, fired back at the comedian while threatening him with jail if he does not pull down Mma’s content from his page.

“Mrfunny_ Na that senior man go carry you go prison if you don’t bring down that video within 24 hours,” he added. 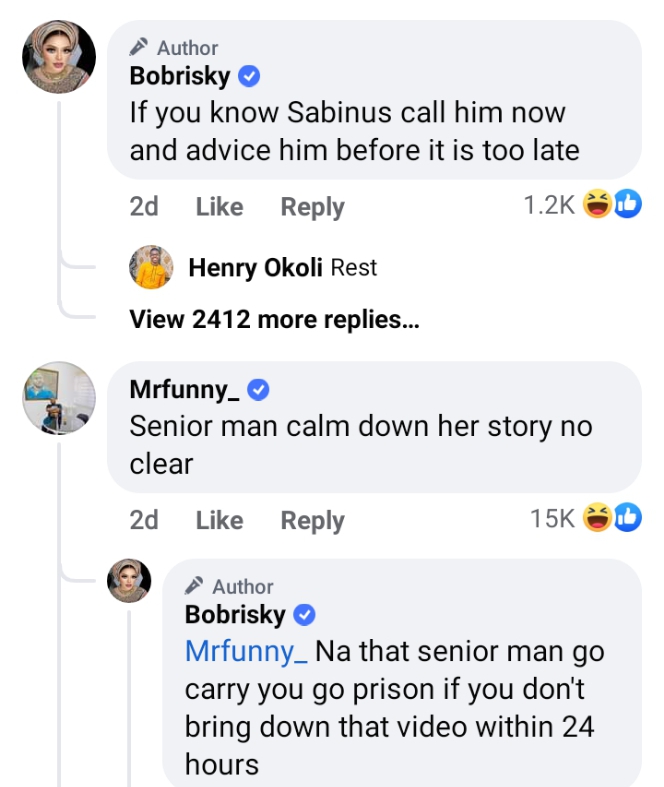 Majek Fashek, ‘The Rainmaker’, is dead

I was a bus conductor for almost a decade, says Small Doctor