Tonto Dikeh, Nollywood actress, has reacted to the allegations of drug abuse brought against her.

The actress and Prince Kpokpogri, her ex-lover, have been at war on social media since their relationship turned sour.

Dikeh had accused Kpokpogri of cheating, saying she called it quits after she received leaked audio involving him.

Kpokpogri, however, countered her claim, alleging that Dikeh’s “heavy” drinking and smoking caused the end of their union.

The politician had also demanded that the National Drug Law Enforcement Agency (NDLEA) conduct a test on her, adding that if his claims are false, he would drop the ongoing trial against her.

“I’m ready to foot the NDLEA cost to test if you never abused hard smoking and heavy drinking. If found to be false, I will waive my right to trial for one year. This was what broke us up and not an aftermath voice note,” he had said.

But in her reaction, the film star asked the NDLEA to produce any drug abuse report they have on her if Kpokpogri’s accusations were true.

“Dear, NDLEA, if you ever have a report of me on drugs, I will gladly show up. And I will be glad if you oblige us the honour to record the whole process,” the controversial Nollywood star wrote. 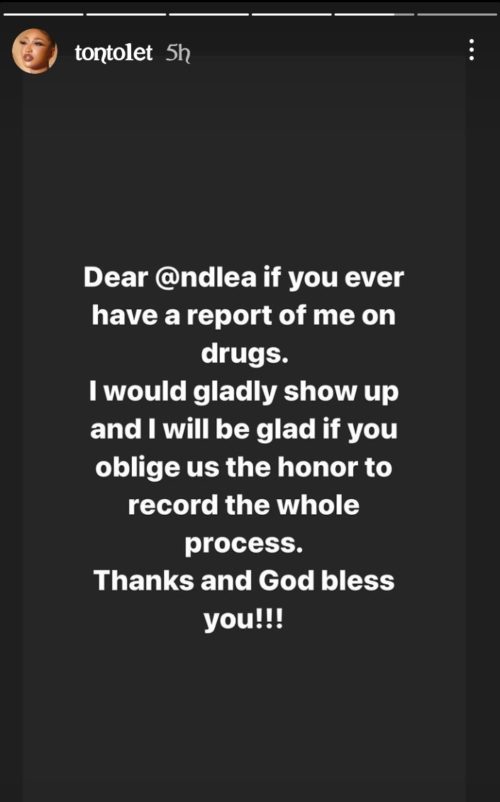 To buttress her point, the actress shared a screenshot of what she suggested was their breakup chat on WhatsApp.

In the chat, Kpokpogri appeared to have tried to convince Dikeh that the leaked audio is fake and employed the use of cloned voices.

But the actress, who visibly refused to accept his explanations, ended up blocking him on the messaging platform.

“I’m a truthful person. I have not a bone of lie in me. I tried so hard to ignore these. You can’t ridicule me with the story that you broke off this relationship and then I leaked a voice note that would affect me too,” Dikeh wrote.

“You can’t also use my past to hurt me either. A relationship ended privately. You should have left it in peace that way. Rather you went ahead with your blackmail threats and actually carried your threat out.

“You begged me to publicly come out and defend you in this. I didn’t. Is that my crime? How could I support you with such a demeaning leaked voice note! So far, you have been the salty one and I have folded my hands to watch.

“I would love to respect you. But you would need to give me the opportunity to do so. Respect is earned!”

Dikeh earlier filed a petition where she detailed her allegations against the politician. Rumours also surfaced that Kpokpogri was arrested by the Department of State Services (DSS) over the controversy — but he denied it.

The actress further accused Kpokpogri of extortion, blackmail, and recording the intimacies of ladies he dated.

Iyabo Ojo: I took permission from my kids to join ‘Real Housewives of Lagos’ cast