Rahama Sadau made her stage acting debut in Abuja on Sunday as she starred in ‘The Lion and the Jewel’.

Written by Wole Soyinka, Nobel laureate, the play is one of Nigeria’s most celebrated theatre works.

At its reenactment at the Transcorp Hilton Hotel, Toke Makinwa, a media personality, played the lead protagonist Sidi – a pretty damsel whose love is courted by the traditionalist Baroka “the lion” and the arrogant modernist Lakunle.

For Sadau, playing a part in the play was an “amazing” dream debut.

One of the few actresses to cross over from the Hausa film industry(Kannywood) to mainstream Nollywood, Sadau told TheCable that she was initially anxious about the stage performance.

“At first I was very nervous being that this was my very first outing; I initially saw stage drama as very difficult but from my experience, it’s very powerful, it has brought out my hidden talents. It’s so amazing,” she said.

Sadau was in 2016 expelled from Kannywood for playing a love interest in a music video by ClassiQ, an indigenous rapper. The ban was lifted a few months ago. 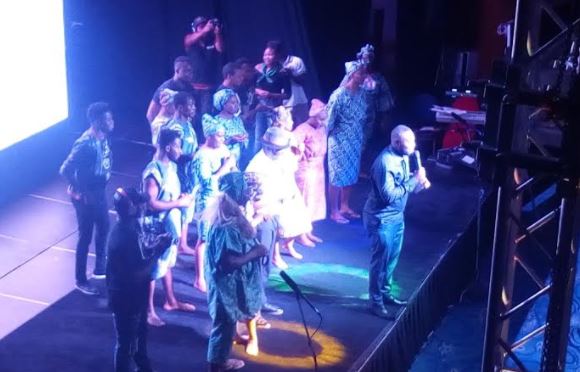 Powered by Play Network Nigeria (PNN), ‘The Lion and the Jewel’ production was directed by Agozie Ugwu.

It was laced with vintage and contemporary Nigerian songs such as ‘Joromi’ by Victor Uwaifo, ‘African Calypso’ by Lagbaja and ‘Yeba’ by Kiss Daniel).

Speaking about the play, Enyinaya Nwigwe, ‘The Wedding Party’ star, said: “I can say for sure that Nigerian stage productions are back big time.

“We just have to ensure we maintain quality. This particular production was excellent. Who knows, I could soon hit the stage as well.”

‘The Lion and the Jewel’ was first performed in 1959 at the Ibadan arts theatre, Oyo state.