Born in the pastoral town of Ondo where men and women clutch cutlasses and hoes to cultivate farmlands, Oluwadamilola Akintewe, the 22-year-old law student of Adekunle Ajasin University, Akungba-Akoko (AAUA) is toeing a different career path; which focuses on women empowerment and fostering accountability.

Raised by a farmer, Akintewe’s journey has been one of sheer brilliance. This led her to share the stage with 19 other tremendously bright students in 2014 on a show organised by Bukola Ladoja, the former first lady of Oyo state.

Speaking with TheCable Lifestyle, Akintewe said it was the nationwide competition — where participants swept the popular Oja Oba market as a community development programme after a series of academic drilling — that inspired her foray into volunteerism.

From there, she marshaled into the sea of community services and is now passionate about cleansing the society of illiteracy and gender-based violence. Akintewe has volunteered for multiple organisations to execute projects in this regard.

It was in this same vein that she raised $5,000 when she was still a 200-level student of Adekunle Ajasin University (AAU) for a project aimed at training women in the Àkókò area of Ondo. The project touched 140 women in six communities, who were trained for a period of six months by professional artisans.

Akintewe also recalled how she was accosted on the lonely campus road by a cutlass wielding-man who tried to sexually abuse her. She said the incident occurred on one daunting Sunday night — while returning from church.

Following the experience, she turned this personal occurrence into a movement where female students on campus can share their traumatic sexual and gender-based violence experiences. The community served as a medium to listen, placate and campaign against the destructive menace of sexual violence.

“Around 2018, I started getting direction as to the part of social impact I wanted to do. It has to do with a personal story,” she told TheCable Lifestyle.

“I had had a personal attack on campus. In my school, Adekunle Ajasin University(AAU), I was attacked when I was coming from church and I had this person come at me with a cutlass.

“I thought I was being pranked but it was real. The entire experience gave me a first-class view of the reality of domestic violence and sexual violence. As a Law student, I know a lot about law and policies, but then I realised it is necessary to have them or to have them work. So, that was how I started my grassroots movement.”

She named the movement ‘Forbidden Topics’ and described it as “a school and online community of women who use their own personal stories to advocate against gender-based violence.”

Akintewe also led other students in the community to push for the review of AAU’s code of conduct book which recognised sexual violence as a mere misdemeanor. 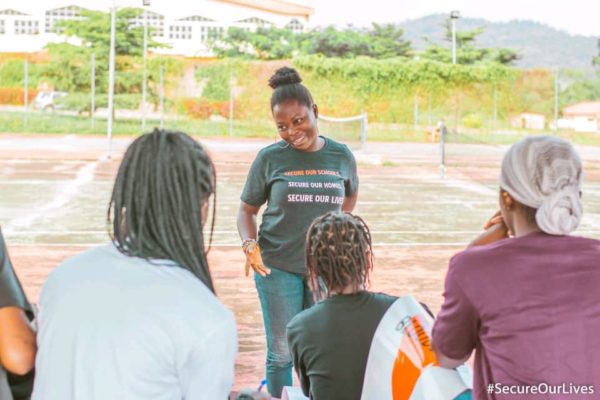 She also partnered with the Theatre Art department of the university to visually simulate a sexual abuse scene.

“Before the COVID-19, we had a petition that called for my university to review the code of conduct rule book so that sexual violence on campus can be adequately penalised because such offences were not penalised in my school,” she said.

“I partnered with the theatre and performing art department to recreate a sexual abuse scene in front of the University management and this set into motion the review of the rule book for the first time since 1999.”

At the age of 21, Oluwadamilola became the only Nigerian to make the top ten of the global student prize – an award with a cash prize of $100,000.

In 2022, she won the Diana Award. The award honours young people who work to improve the lives of others across the world. It is in honour of the late Princess Diana.

Speaking on her drive, Akintewe believes that women should have equal access and the same opportunities as men. She added that though females are biologically and physically different from males, gender should not serve as a stumbling block for women.

Striving to achieve more, the 22-year-old change-maker is currently working with an organisation as a policy tracker. She intends to use her time, especially during the Academic Staff Union of Universities (ASUU) strike, to track every law and budget that comes from the federal assembly and the state assemblies that are targeted toward women’s rights.

“I’m more of a person who no longer wants to talk, I’m passionate about tracking the money and ensuring that our leaders don’t make promises in vain. I want to make sure they are implemented,” she said.

I did it because of ASUU strike, lockdown, says landlord who waived 2020 rent for Abia students

Nigerian woman sent home from work in US for wearing hijab

INTERVIEW: I lost confidence on BBNaija over my poor background, says Sammie