‘At almost 50, you think you can be manipulative’ — Paul Okoye hits Lola over birthday post on Psquare’s feud

Paul Okoye, a Nigerian singer, has taken a swipe at Lola Omotayo, wife of Peter Okoye, his twin brother, over her birthday message addressing the feud between the pair.

The identical twins and former member of Psquare, a now-defunct musical group, marked their 39th birthday on Wednesday.

Lola had taken to social media to celebrate the duo while weighing on the feud that has lingered between the twin brothers.

In the post, she had admonished them to reconcile their differences and make the best out of life because it is too short.

“Hmmm….to the twins, whether you like it or not, you are brothers; you are not only brothers, you are twins. I wish you both a very happy birthday. Life is short, make the best of it. Respect and Love should be sacrosanct,” she had written.

Reacting to the birthday message on Thursday, Paul, who is better known as Rudeboy or King Rudy, accused Lola of pretending to be a “good woman” while she “manipulates” things behind closed doors.

“At the age of almost 50 you still think you can still be manipulative and always trying to be in control as usual… well I’m not there anymore, Jude also is not there anymore which was exactly how you wanted it,” he wrote on his Instagram stories. 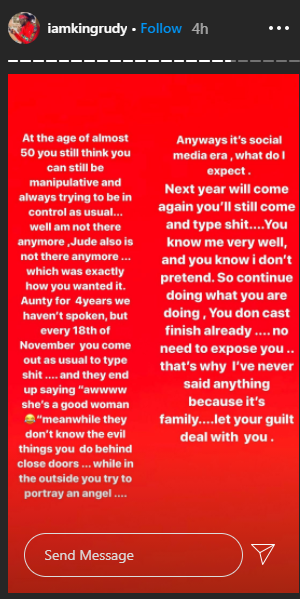 The singer wondered why Lola shows up on social media every year to pen birthday messages to him and his twin brother even though he has not spoken with her for four years.

“Aunty for 4 years we haven’t spoken, but every 18th of November you come out as usual to type shit.. and they end saying awwww she’s a good woman,” he added.

“Meanwhile they don’t know the evil things you do behind closed doors…while in the outside you are trying to portray an angel. Anyways it’s social media era, what do I expect. Next year will come again you’ll still come and type shit.

“You know me very well, and you know I don’t pretend so continue doing what you are doing, you don cast finish already… no need to expose you.. that’s why I’ve never said anything because it’s family….let your guilt deal with you.”

The twin brothers parted ways in 2016 to pursue their personal ambitions and solo careers after a disagreement on the role of Jude Okoye, their older brother and immediate past manager.

Ifu Ennada: l feel neglected by God… am I such a terrible person?

Will Smith: How my mum caught me having sex at 16

Wizkid: I was scared to become a father at 21