The Delta state police command has arrested Mike Omoruyi, Nollywood producer, alongside four others over alleged illegal possession of firearms.

Bright Edafe, the command’s spokesman, broke the news in a statement on Saturday.

According to him, the 38-year-old filmmaker was apprehended by the command’s rapid response squad (RSS) during a routine patrol on Tuesday.

Edafe said after conducting a search on him, the RSS operatives recovered a Lar rifle without magazine, one fabricated AK 47 rifle, one Air rifle, one Pump action, one English double-barrel gun, and two toy guns from him.

The spokesman added that further investigation showed that Omoruyi allegedly hired the above-mentioned guns from Otuya Josiah for film production.

“On the 15/6/2021 at about 1245hrs, Police Operatives attached to the Delta State Police Rapid Response Squad, while on patrol along Obiaruku/Umuebu road intercepted and arrested one Mike Omoruyi ‘m’ 38yrs of Odo Street Obiaruku,” the statement read.

“When a search was carried out, the operatives recovered one Lar rifle without magazine, one fabricated AK 47 rifle, one Air rifle, one Pump action, one English double barrel gun and two toy guns from him. 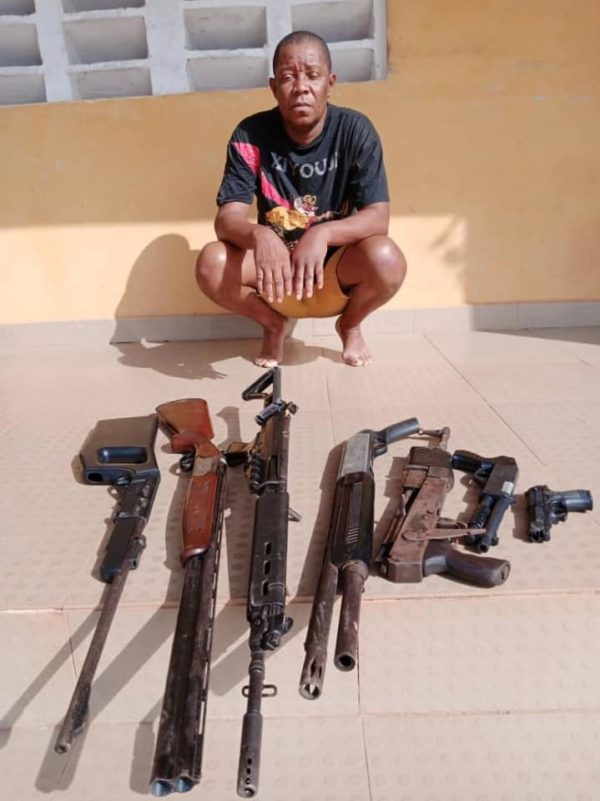 “Investigation later revealed that the suspect happens to be a Nollywood producer who hired the above-mentioned guns for film production.

“Further investigation led to arrest of the suspected gun runner, one Chief Otuya Josiah ‘m’ 57yrs of Umuebu community who confessed renting same to the first suspect at cost of fifty thousand naira (N50,000.00) for film production. Investigation is ongoing.”

Edafe added that operatives of the command also arrested suspected armed robbers in different parts of the state who are also in possession of illegal arms.

He said all the arrested suspects have been transferred to the state criminal investigation department for further investigation.

Omoruyi’s arrest comes a few months after President Muhammadu Buhari had directed security agencies to shoot anyone seen with AK-47.

The president gave the directive in the early days of March — at a time criminal activity in some Nigerian states was at its peak.

Dotun: People think you’re into something illegal once you’re rich in Nigeria