Shade Ladipo, Nigerian media personality, has taunted DJ Cuppy, suggesting that she is not good enough to be a musician.

Ladipo took to her Instagram stories on Monday to assess the personality and music career of the disc jockey (DJ), whose real name is Florence Otedola.

In the post, the radio personality extolled the entertainer’s charming personality while rating her character as well as values above 100 percent.

The on-air-personality (OAP), however, opined that the same can not be said of Cuppy’s music career which she rated zero percent.

Ladipo said with her “solid character”, the ‘Gelato’ crooner would find “what she’s good at eventually” — suggesting the entertainer should consider quitting music.

“DJ Cuppy’s music 0/100. DJ Cuppy’s character/values 120/100. A solid character will take you much further than talent. Give the girl all her flowers. She’s legit abeg she will find what she’s good at …. eventually,” she wrote. 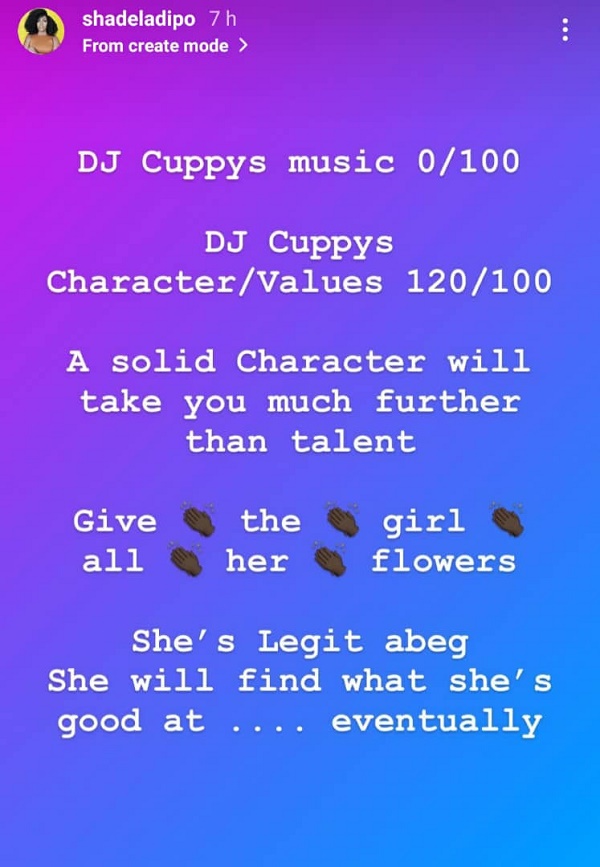 Cuppy, who doubles as a daughter to Femi Otedola, a billionaire businessman, had earlier opened up on her battle with incessant criticisms, adding that she’s tired of people telling her how to live her life.

“I have come to a point where I’m like, it’s time to lock up because I’m tired of people telling me what I should do and what I shouldn’t do…Someone tweeted, Cuppy you’re too rich to be wearing the wigs you wear,” she had said.

Nicki Minaj announces retirement from music — to start a family

VIDEO: Tonto Dikeh opens up about rocky marriage, says ‘my husband humiliated me’