Lyta has apologised for being an absentee father, says baby mama

Kemi Ayorinde, baby mama to Lyta, Nigerian singer, says she has no regret calling him out for allegedly neglecting his role as father to their child.

The 21-year-old mother of one recently claimed that the musician had only spent the total sum of N40,000 on the child since he was birthed nine months ago.

In a question and answer session on her Instagram Stories, she revealed that the singer has apologised to her after the outburst.

Ayorinde said she decided to speak out about her ordeal because it was already taking a toll on her that she feared she might die if she had remained silent.

“He (Lyta) has apologised literally after the interview and he has been calling everyday too,” she said.

“I don’t regret it (referring to her outburst). God knows I would have died over ‘love/relationship’ if I continued taking the pain and didn’t speak out. I don’t want to die and leave my son behind. We both literally have no one — just each other and God.” 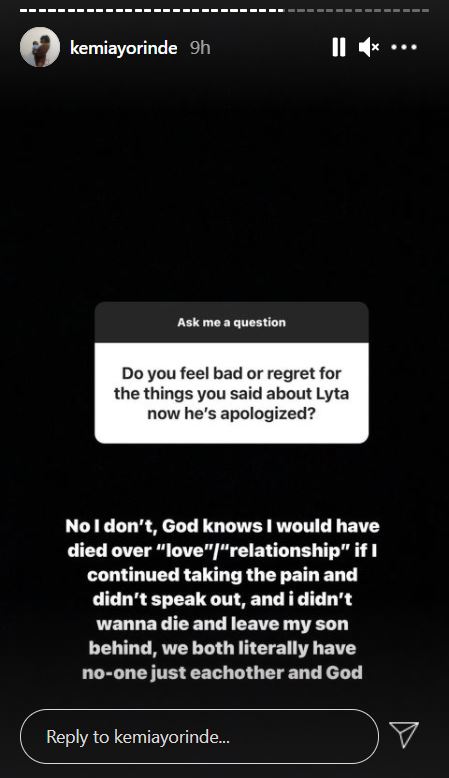 When asked what she would have done differently earlier to save the relationship, Ayorinde said she regretted involving another party in the union.

“I don’t really know to be honest. One thing I just regret is involving Shigh into our relationship because I thought she could change things instead she made it 10 times worst,” she added.

Lyta, whose real name is Opeyemi Rahim, has not publicly addressed the claim against him.