James Brown: My mum rejected me two days after I was born

James Brown, the controversial Nigerian crossdresser, says his mother rejected him two days after she gave birth to him.

Brown said after he was rejected by his mother, his grandmother took it upon herself to breastfeed and nurture him.

The crossdresser also revealed that when he clocked six, his mother eventually “surfaced” but still refused to accept him, adding that it was his grandmother who continued to take care of him.

“This is my grandma the woman  I cherish the most with my blood, body and soul. This is the only woman who took me in when I was rejected by my mom back then when I was just 2 days old, this woman breastfeed me, clothe me, gave me shelter, knowing fully well that I’m just her granddaughter/son,” he wrote.

“Back then I thought she was my biological mom for 6 years, even after my biological mother finally surface, I was still not accepted. My grandma took me back loved and supported me as always. I stayed with my grandma and my great grandma almost all my life.” 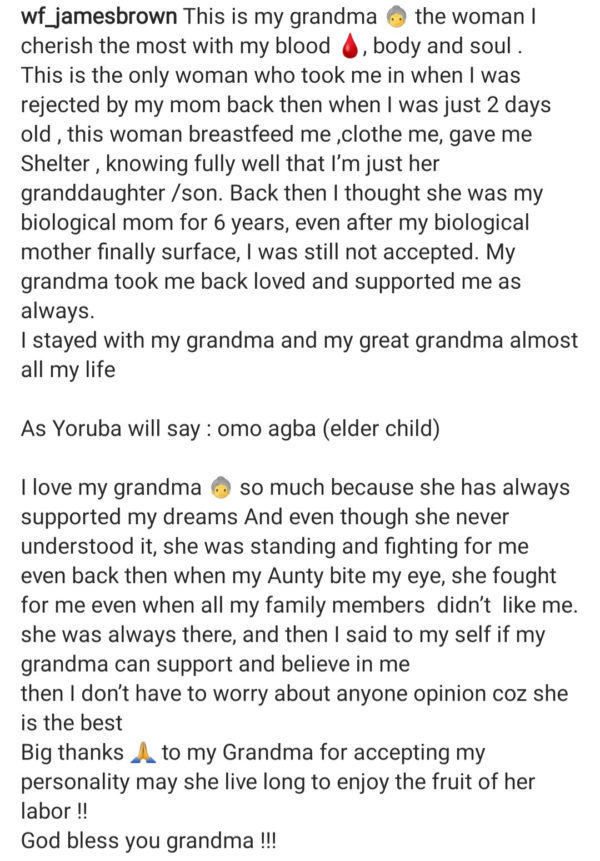 Brown also appreciated his grandmother for her support and sacrifices over the years.

The crossdresser, whose real name is James Obialor, came into the limelight after a video where he made a grammatical blunder — “They didn’t caught me” — following his arrest years back went viral.

Ada Ameh: How I got pregnant at 13

RMD thrilled to be Mike Edwards’ dad on his Nollywood debut

Funke Akindele: God’s plan is bigger than your mistakes