Etinosa Idemudia, Nigerian actress, has stirred outrage on social media platforms over her threats to use the Quran as ashtray as she earlier did with the Bible.

The controversial actress went live on Instagram on Saturday and was seen ashing on a Bible while she also labelled a particular verse of the holy book “a scam”.

Her action obviously didn’t go down well with a segment of social media users who wondered if she could try the same stunt with a Quran.

An Islamic poet also dared the actress to try it with the Quran and see the dire consequences that will befall her.

In a swift response, the comic actress declared she wouldn’t hesitate to do the same if she’s given a Quran. She added that she won’t do it for free.

“Give me a Quran and I will mess it up in two seconds, who the f*ck do you think you are to threaten me with a textbook named a Quran or Bible? Are you m*d? Are you a b**tard,” she reacted angrily.

“On this Quran matter, I know you want me to do it but I can’t be giving you guys free show and giving bloggers free content. You need to pay me b*tch. Pay me and I will do it. 2 seconds! I dey fear you? Never! I fear God only and God is never confined to a textbook. Worshipping a textbook printed in Idumota is Idolatry. God hates idolatry. Aren’t you concerned about how confident I am? It is because I have God’s backing on this”. 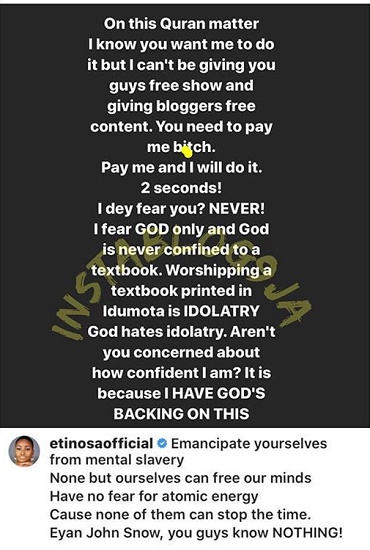 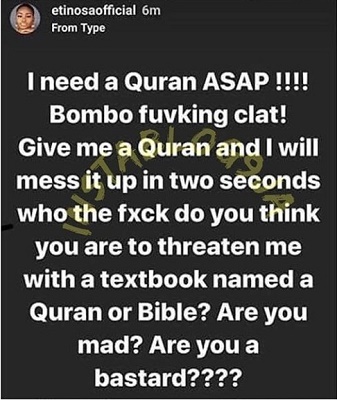 Her remarks, however, opened the floodgates of reactions on social media platforms especially Twitter where users registered their outrage.

“Christianity is a very liberal religion. But honestly Etinosa my Edo sister be advised, Islam is not like Christianity, do not use the Quran as an ashtray. You can’t stand the outrage because the consequences of your action maybe forever. Muslims don’t play with their religion,” another user said.

Christianity is a very liberal religion… but honestly Etinosa my Edo sister be advised, Islam is not like Christianity, do not use the Quran as ashtray. You can’t stand the outrage because the consequences of your action may be forever.. Muslims don’t play with their religion.

You see the way you guys are outraged at Etinosa's antics, now imagine what you'll achieve if y'all could maintain this same level of outrage at the govt that has made your lives miserable.
Just imagine this thing fess…

But she used d Bible & even posted it, no christian is even challenging her here.

''Who the gods want to destroy, they first make mad''

Etinosa ashtraying the bible is one of the most abominable things anyone can ever do in their life time, but that aside.

Those of you shouting that she better not try the Quran are equally as dumb as etinosa.

Is Etinosa Depressed? YES
Is she fed up? YES
Does she need help? YES

Truth is the signs are there, I've been there and I can relate to the whole depression thingy, but she's doing way too much!!!

Etinosa can't even act, she was a professional olosho in the street of Benin she has at least f*cked 1000 alhaji's that's how she finally made it into acting , since then she has been useless showing off her flat retarded boobs now she's using Bible to quench cigarettes Ashes

Unfortunately what people fail to understand is that Etinosa my Edo sister is shouting , screaming & begging for help before our very eyes but we are in country where we are all trying to survive as well so her crys for help will go virrually unnoticed. It's just visious cycle

Etinosa is going through existential crisis and it's one of the worst to go through. You question everything and anything, I hope she finds a way to live through it.

Muslim communities in Nigeria should please give nollywood actress Etinosa a QURAN,i want to see if she can make good of her threat of messing it up😂😂😂 pic.twitter.com/gp5XgFQb4r

some people turn out to be, though a lot of life's issues but no one life issue should make anyone loose his/her senses.The Etinosa of a girl will live to understand what being reasonable and not being reasonable can fetch for a person. Actions might lead to shit soon or later.

Ya all see a celebrity living a reckless life, and doesn’t give a fuck in Etinosa
Well well I see a fucking depressed soul I pray she gets the help she needs, cus she needs help.. pity, her friends and family aren’t seeing the trait..

This Etinosa babe is so retarded, donno how such a person is a celebrity…

Each time I see Etinosa’s name in blogs, it’s for one razz thing or the other. Is she a comedian or influencer or what exactly? Babe needs to fix up.

Etinosa had better be careful before she tries rubbish with The holy Quran. If dem come arrest am, some mumu go dey shout say na oppression and say Islam na violent religion. Tell her about Section 204, Criminal Code Act 1990 ( Criminal Code Act 2004 LFN) I don talk my own sha pic.twitter.com/ctb6vTZ7P6

Someone dared Etinosa to smoke weed with a Quran sheet and show in a Live video.
He said she should repeat the same thing she did with a bible and she will see the wrath of God in a few days😂😂.
People can rate this their books sha 😂😂.
Something I will use to wipe yansh😂😂.

UK baby with genetic disease gets ‘world’s most expensive’ drug at £1.79m